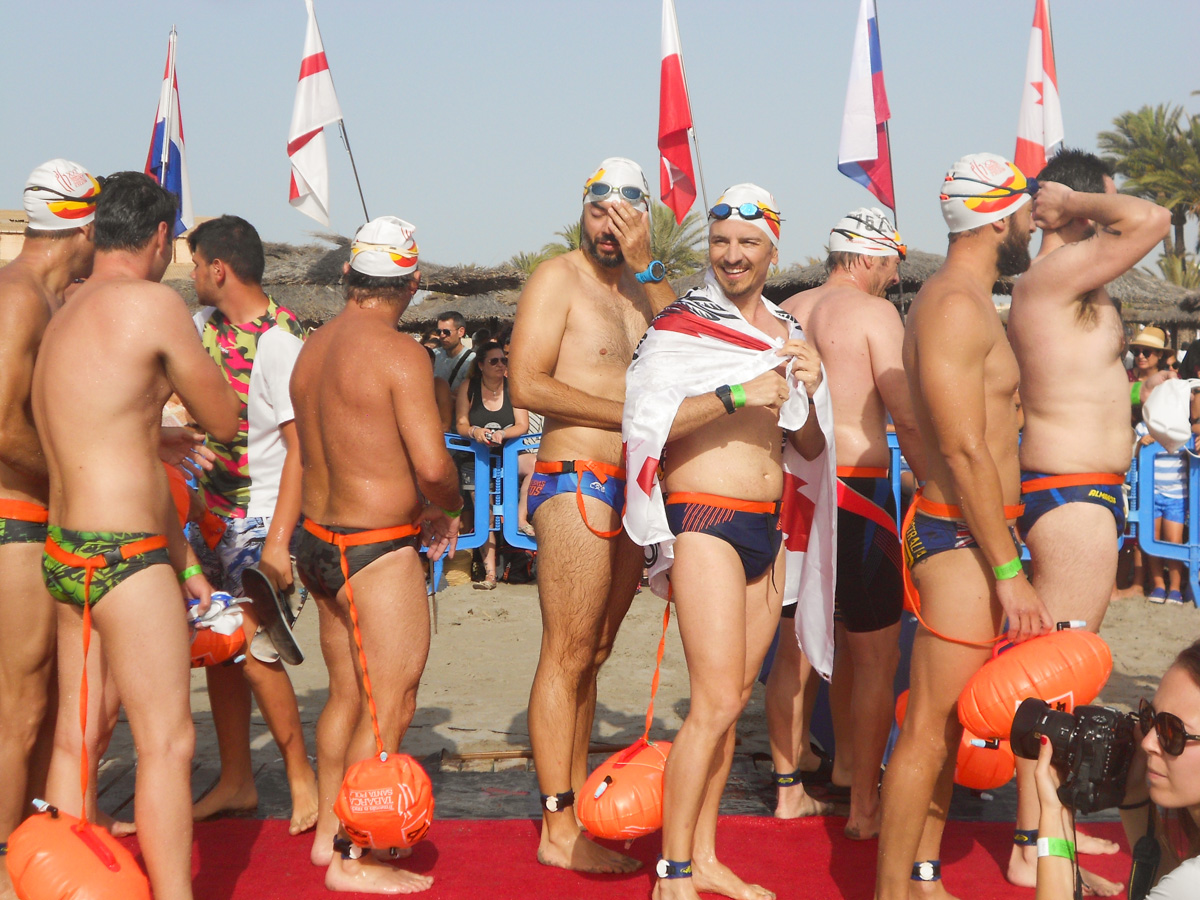 Hailed as the best open swim in Spain (and amongst the top 100 world wide), Santa Pola hosted the 23rd edition of the annual swim from Tabarca to Varadero Beach in Santa Pola, a distance of 5.9 km if you swim in a straight line, but winds and currents push you off course with most competitors swimming 6.5km. 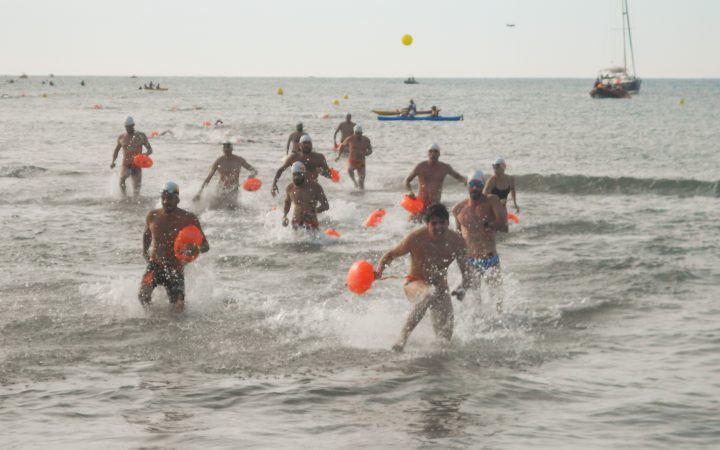 Make no mistake about it, this is a tough event, and being an open water swim, is fraught with dangers, from tides, currents, waves, cold water, stinging jelly, fish, to sheer exhaustion. At the finishing line the Cruz Roja medical staff have an uphill task to treat the cold, the cramped, the exhausted and those stung by jelly fish. 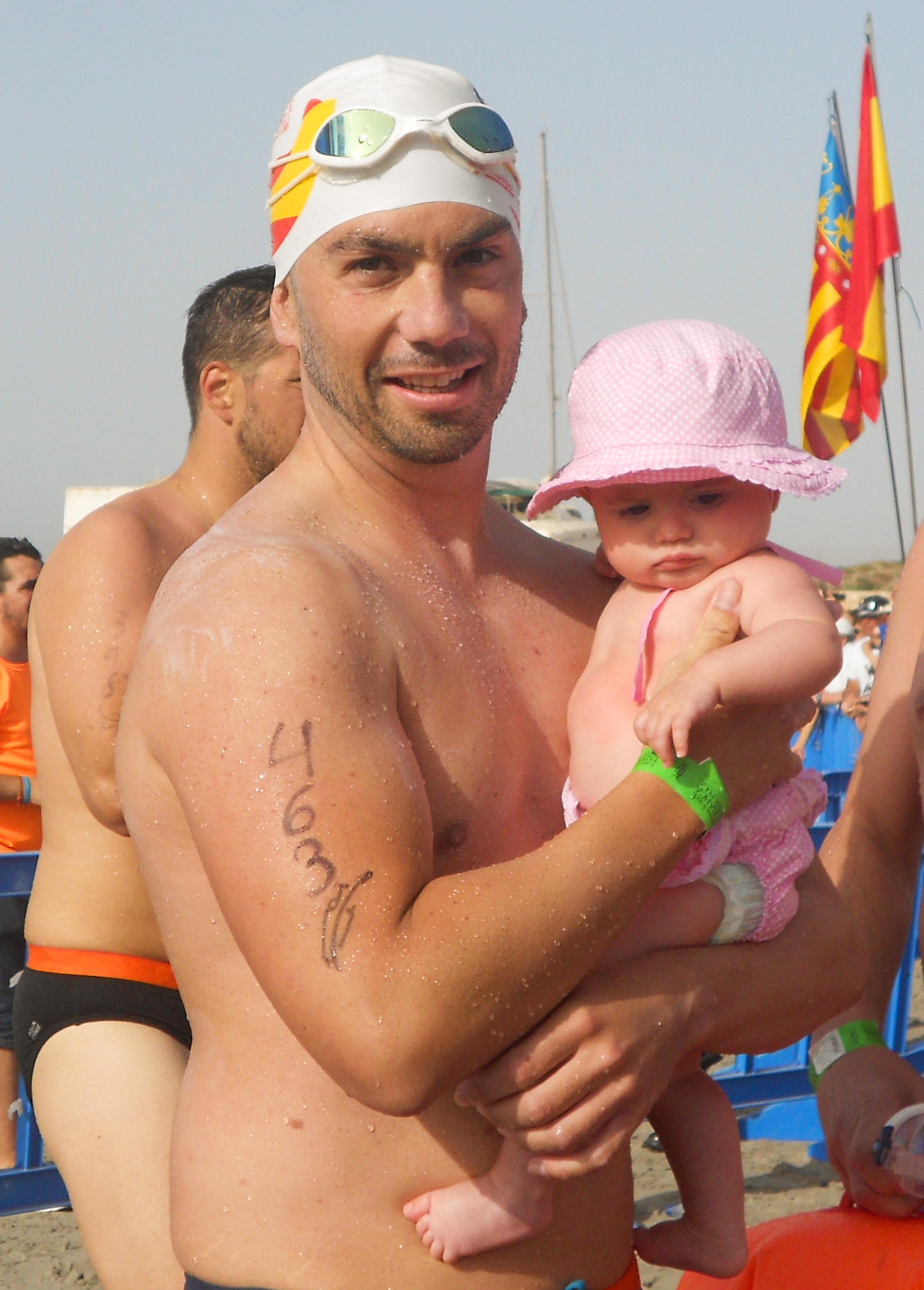 abilities apply for the 1600 places in the event? The bidding process starts in February each year and by March the “lucky” 1600 have been notified of their place in the event. Entrants this year came from 14 different countries, with a minimum age of 15 years of age. For some, training is an on-going routine, but for others there will be 14 weeks of intensive training of between 3000-5000mtrs of swimming per week. For those competitors in northern climes, finding somewhere to train in open water, especially between March and July, will be very difficult.

The event organisation for the swim is 10-12 months in the planning with Club Deportivo Natacion Alone –Santa Pola, working closely with the Ayuntamiento in Santa Pola, including the Office for Tourist Information (Jose Manuel Blasco) and many more, without whose huge effort and personal commitment, the event would not be staged. 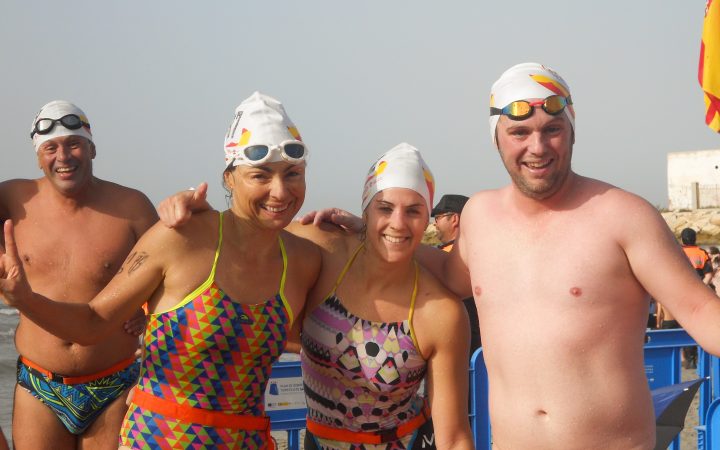 The swimmers gather at the port of Santa Pola from 05.30am on the Sunday morning, where already the volunteers and infrastructure is in place. A fleet of ferries is available to transport the contestants, officials and spectators to the Island of Tabarca for the 07.30 start. By 06.00 most competitors have collected their obligatory kit accessories consisting of an electronic ankle chip, an orange buoy which is secured to their waste, a swimming cap displaying their competitor number, and an emergency whistle, to be used in cases of emergency to call for assistance during the swim. 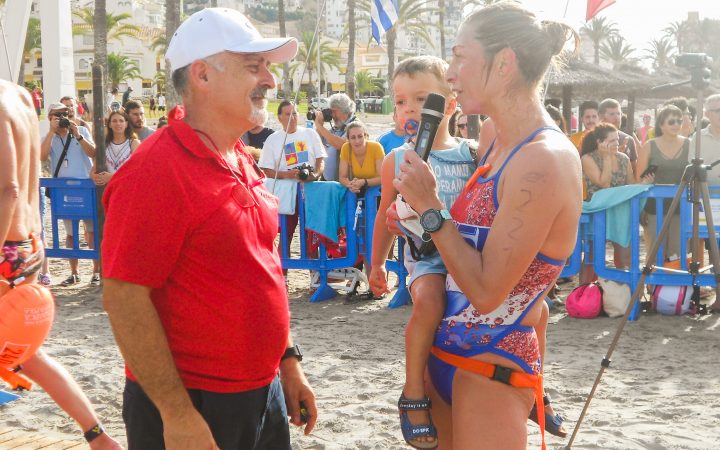 All the while, Jose Manuel, megaphone in hand, is marching along the quay side, like a general in a major battle, organising proceedings, and directing affairs. The sun has not yet risen and already everyone is bound for Tabarca, some sitting quietly, others engaged in loud chatter as the sense of anticipation grabs everyone as we await the 07.30 start from the beach. 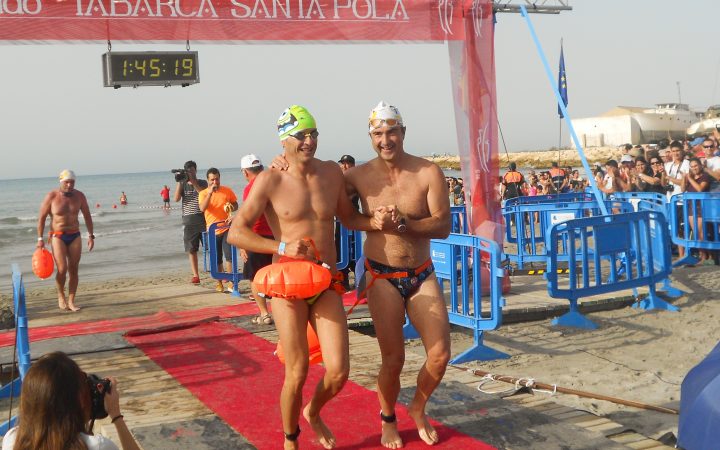 Suddenly, the race starts, with the faster swimmers taking their place at the front row as they charge down to the water. With 1600 competitors it is another 8 minutes before everyone is in the water, heading back to Santa Pola. The course is marked out with directional buoys at every kilometer, which also act as resting places for those in difficulty. Supporting the swimmers at sea is an armada of kayaks, inflatable boats and all manner of craft positioning themselves within easy reach of the swimmers. At this point it is an incredible sight with 1600 orange buoys bobbing about in the open sea, surrounded by the froth created by 3200 arms propelling the competitors to Santa Pola. At this point, the race is carefully controlled, and swimmers must reach certain distances within certain times otherwise their race is over and they have to retire from the race. 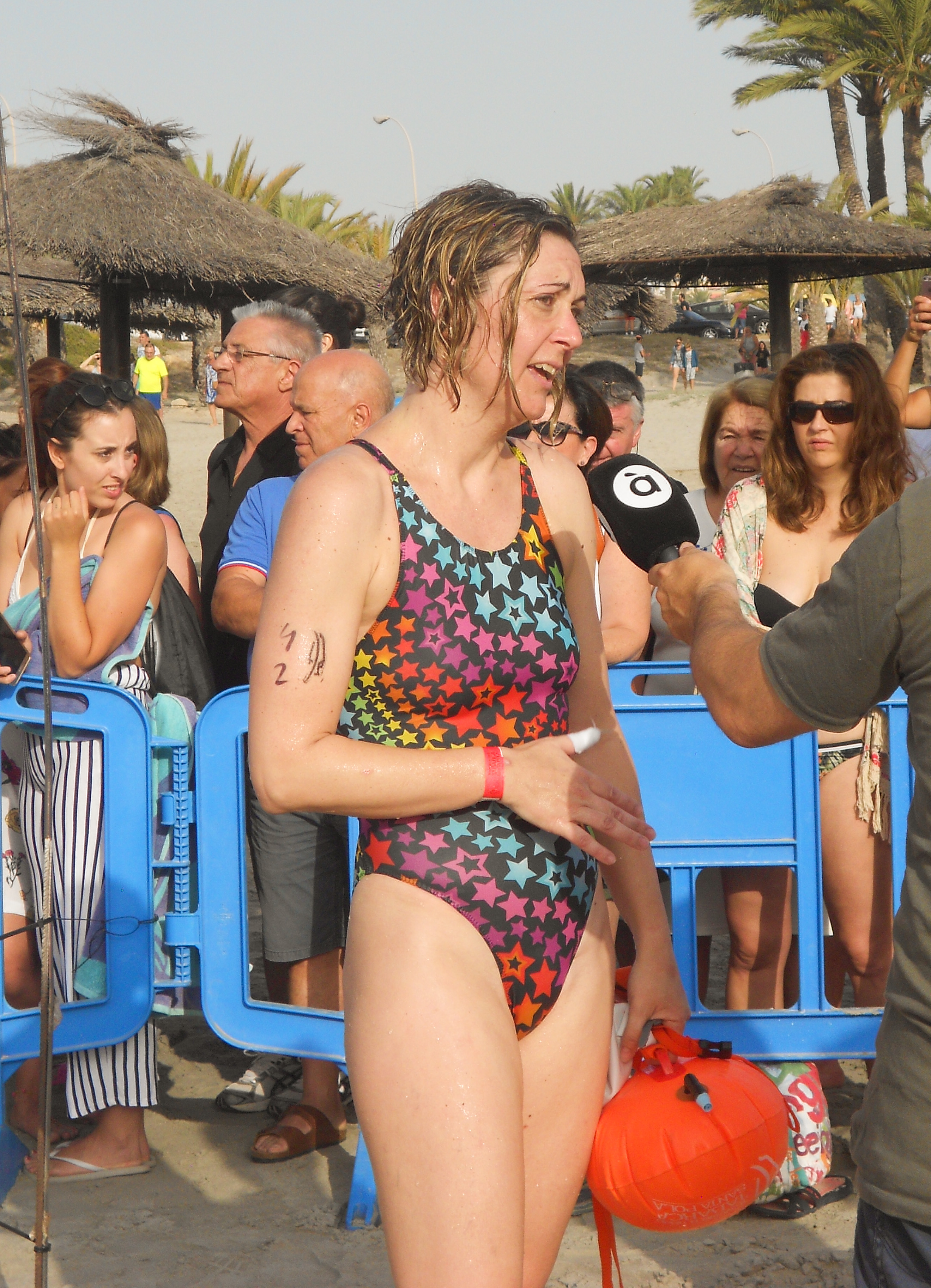 The journey out to Tabarca saw swells of 1-1.5 mtrs through which the swimmers are now moving but it is only 1 hour, 13 minutes and 49 seconds before Alberto Esquitino Garrido is the first to reach Varadero beach, with Rebecca Santos Arriga finishing in a time of 1 hour 20 minutes and 35 seconds to become the first female competitor to finish, being 8th overall. 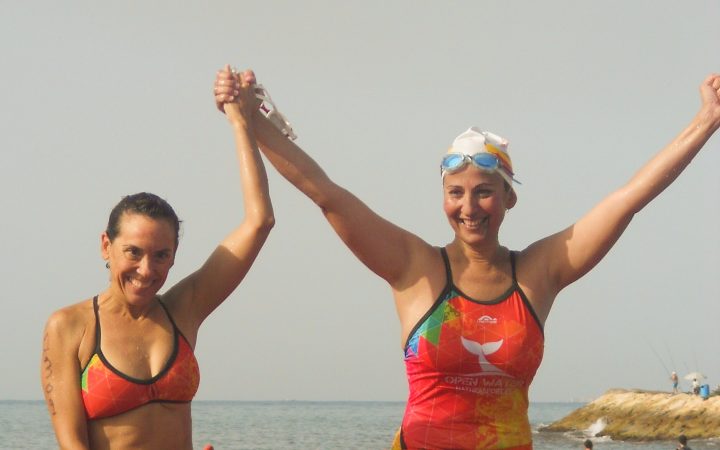 In the water the mass of orange buoys bobbing around on the “frothed” water is clearly visible as one by one the weary and the lame drag themselves to shore and onto the finishing line. Amongst the 1600 competitors there are 2 with impaired vision with another 16 with other physical disabilities. With a final “Cut off Time” of 3 hours and 30 minutes the last swimmer crossed the finish line at 3 hours and 27 minutes.

This isn’t just about winning the race or achieving a personal best. For 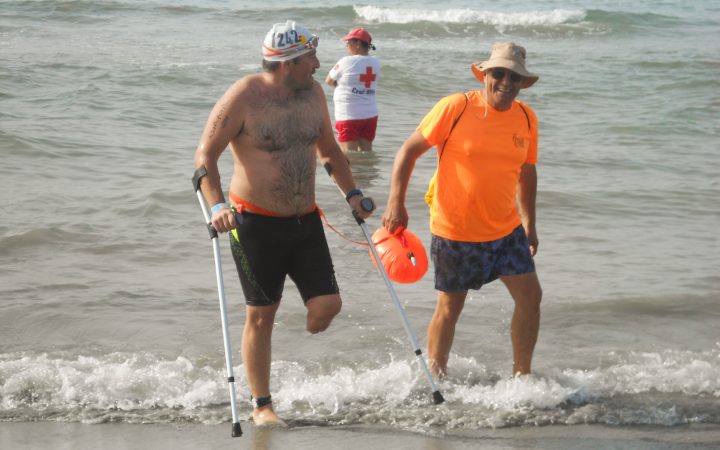 every competitor there is an individual story of application, determination, bravery, self-restraint, abstention, self-sacrifice, motivated by the thought of the sense of achievement for just finishing the race, and next year their application will be submitted to the race organisers in mid-February, to do it all again!

as experienced by Geoff Young 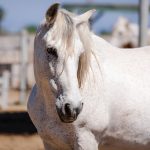 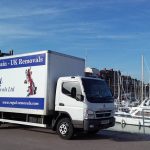