The habit of re-naming airports after famous people has grown in recent years. Occasionally the airport does become known by the name of the illustrious personage thus honored; most famously, New York International Airport has ceased entirely to be known as New York or Idlewild Airport and is now globally known simply as “JFK” in honor of President John F. Kennedy. Mostly however airports remain known by their previous geographical names with the honorific memorial clumsily bolted on as an infrequently used afterthought, examples of this are Liverpool John Lennon Airport and most clumsily the Adolfo Suárez Madrid-Barajas Airport. One wonders how many of the millions of passengers who pass through our local airport every year even notice that its correct full name is “Aeropuerto Internacional de Alicante-Elche Miguel Hernández”. It is likely that even fewer passengers actually know who Miguel Hernández was. We decided to follow the trail of this local hero, which led us to his birthplace in the beautiful and historic city of Orihuela.

Hernández was born in 1910 into a modest family in Orihuela. He received a limited education and went to work at a young age. Despite these disadvantages, he set about educating himself and became well read in both classical and modern Spanish literature. He developed considerable skills as a poet and writer, his work being recognised for its combining of fresh contemporary imagery and concepts with more traditional Spanish rhythms and rhymes. His work was published and became well known in the turbulent 1930s. He joined the Communist Party and at the outbreak of the civil war in 1936, he enlisted to fight against the military coup led by General Franco. Hernández saw action in the Battle of Teruel as well as supporting the Republican cause by addressing soldiers and writing poetry supporting the legitimate government. In so doing, he became a prominent figure in the struggle against Franco.

At the end of the civil war, Hernández was unable to escape Spain and was arrested and put on trial by the Francoist regime. His alleged “crimes” included having written poetry attacking the Francoist coup. He was initially sentenced to death but this was changed to a sentence of 30 years imprisonment, apparently due to Franco fearing that the political execution of artists and poets gave his regime a poor overseas reputation following the execution of Federico García Lorca. Hernández however did not survive long; he contracted a number of illnesses in prison and died of typhus and tuberculosis in Alicante prison in 1942.

During his imprisonment, Hernández had continued to write poetry and verse, often in the form of songs.  He left behind his wife, Josefina and a surviving son; Josefina lived until 1987.  His work offers an insight into the suffering of Spain and its people especially during and immediately after the civil war.

His modest birthplace is preserved in his home city of Orihuela and we visited it on a wet and blustery day. The beautifully preserved little house and garden is not just a monument to Hernandez but also a fascinating time capsule of early twentieth century Spanish domestic life and well worth a visit.

The city of Orihuela is a worthy destination in its own right. It is the seat of the local bishop and as such contains a cathedral and numerous magnificent historical buildings. The centre of the old town contains beautiful streets lined with little shops and cafes and winding through the middle of the city is the River Segura. A historical trail can be followed through the old city taking in all of the sights including monastic buildings, church hospitals, noble palaces and Miguel Hernandez’s birthplace museum; a map can be obtained from the tourist information office near the cathedral. It is also possible to walk along the river’s edge and to cross into the magnificent squares of the more modern part of the city where one can find an area dedicated to tapas bars and restaurants.

Orihuela has one last surprise; the working class barrio of San Isidro on the outskirts of the city has become an open-air public gallery for graffiti art, often with a social or political message. At the end of our visit, we walked up the hill into     “Ruta de Murales de San Isidro” and wandered around the streets where every wall is covered with magnificent street art. In addition, yes, the face of Miguel Hernandez, poet and soldier stares out from the walls of his home city. 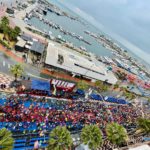 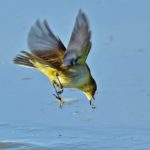