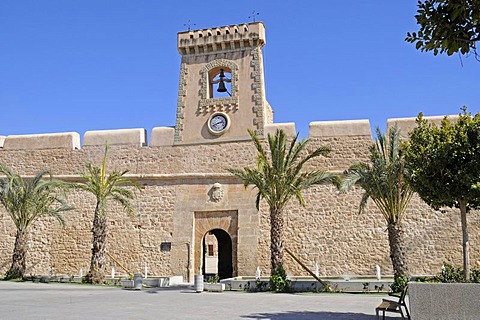 About 20km from Alicante is the busy town of Santa Pola. It is famous for its fishing industry, salt lakes, that produce salt for use on the road and is an ideal destination for kite surfers.

Santa Pola has around 13 kilometres of coastline and a modern marina where you can take a boat ride to the neighbouring Island of Tabarca. The town has a helpful tourist office, a palm park, a fortress castle, an aquarium and an interesting range of cultural and historic museums. There is an everyday fish market during the week and an active street market on a Monday and Saturday morning.

It also has a marked walking route next to the beaches at the southern end of Santa Pola and a 7 kilometre promenade which connects all of the beaches in the central area.

The scenic drive to Grant Alacant begins to the north of Santa Pola. The road which is a very well-known cycling route hugs the rocky shore line, passing the CIMAR marine research facility and in the Summer a variety of chill out bars, finishing at the little hermitage.

Santa Pola was previously known to be a fishing village and is now famous as a tourist beach resort on Spain’s southern Costa Blanca.

What added to the attraction is its proximity to Alicante airport and its miles of sandy beaches mixed with the wonderful climate of Costa Blanca.
It is also a working town which is active in Winter unlike other small tourist destinations that virtually become ghost towns.

In the Summer, Santa Pola is full of Spanish holidaymakers. You will not find many English bars or restaurants here especially when compared to the Torrevieja area.

The sea has marked the history of Santa Pola. The Iberians founded a walled city in the fourth century to trade with the Greeks of Phocaea. The Romans enhanced a key Mediterranean port for maritime trade, Illicitanus Portus, which contained all the elements of a city: a factory of fish salting, warehouses, the Roman House of Palmeral, market, necropolis, etc.

The Castle-Fortress and Watchtowers protect the people from the Barbary pirates.

GETTING TO SANTA POLA

The road to Santa Pola is great and easily reached by car.

The AP-7 autoroute or motorway comes down from Alicante airport which is about 15 minute drive away and goes south to Murcia San Javier Airport.
At the airport, there are numerous airport transfer options to Santa Pola along with private shuttle buses, taxis or Santa Pola car hire.
The N-332 goes right past both Gran Alacant and Santa Pola and also runs from Alicante airport to the north all the way down to Murcia San Javier airport to the south.

La Marina, Guardamar del Segura and Torrevieja can be found on the South of Santa Pola and Alicante on the North side.

THINGS TO SEE AND DO

Santa Pola is an excellent spot for a beach holiday. There is no need to go anywhere else as everything you require for a great holiday in the sun is all right here.

It also has a rich history with its first colonizers dating back to the 3rd millennium BC. Pirates once used the island of Tabarca which can be visited by catching one of the hourly ferries departing from the port of Santa Pola.

Santa Pola has numerous lighthouses and a castle built in 1557. Its port is very much functioning and you can watch the fishing boats return with their catches. The port also has a great marina where as well as the many boats that are moored here; you can also spot lots of fish.

La Marquesa Golf and Country Club is the nearest golf course to La Marina located at the small town of Ciudad Quesada. As you go further south, there are also few golf courses to be found such as the La Finca Golf Course, the Royal Campoamor Golf Club, Las Ramblas de Orihuela Golf Club and Villamartin Golf Club.

There are also budget friendly hotels in the area such as Quatre Llunes, Hotel Michel and Arenales Playa.

The main attraction of Santa Pola is definitely its beaches which run for over 11km and are of exceptional quality with plenty of facilities. It has many beaches to choose from. You will find the beaches of Vardero and Levante as you run up the coast to the north of Santa Pola and the beaches of Gran Playa, Pinet Beach, La Gola Beach, Playa Lisa and Tamarit Beach as you run down to the south.
The majority of the beaches in Santa Pola are vast so you will always find a space to play beach football and volleyball even in the height of Summer.

Market days in Santa Pola are every Saturday and Monday. The town has a big street market full of fruit and vegetables, towels, linen and more including a variety of stalls selling food, fresh juices, drink, olives, etc. It is definitely worth a visit!

This museum focuses on the history of Santa Pola with 4 major topics: Prehistory, the Iberians, the Roman Port and the Nature Reserve of “Las Salinas”. Visitors can also visit the reproduction of a cave dwelling from the era with the hunting and fishing tools utilized during that time.

Housed in a former salt factory is the fascinating and distinctive Salt Museum. You will discover how salt is extracted, its use, characteristics, consumption and the significance of salt in Man’s history and its past and present’s exploitation. The salt flats offer a haven for many ducks, gulls and flamingoes among others. It also has a lookout for bird watchers and a guided tour to the Salt Flats Nature Reserve.

This new museum is devoted to exhibiting the life and times of Santa Pola fishermen over the years.

The main square of Santa Pola is called the Plaza de la Glorieta. It is a pleasant area to gather at night. There are several stalls serving Spanish treats, tapas, drinks, ice cream and selling gifts.

The castle has been a witness to Santa Pola’s important historic events through the centuries, including the expulsion of the Moors in 1609 and King Alfonso XII’s visit. For centuries, it has been the hub of political and military activities. It is still being used today and one of the favourite meeting areas of the locals. Admission to the castle is free but there is a small charge for the museum. It is closed on Mondays.

Another place which is worth a visit is the Aquarium. Fishermen of Santa Pola have donated many of the displays. It is Valencia region’s oldest aquarium and consists of nine big glass tanks showing the Mediterranean’s flora and fauna.

Built in the 4th century AD is this luxurious Roman Villa. This stately home belonged to a wealthy businessman and his family who traded at the Portus Illicitanus. You can still find polychrome geometric mosaics and murals which were used to furnish the rooms.

One of the most important Spanish ports in the Mediterranean is the Santa Pola Port which dates back from the fourth century BC. Salt is still exported from here and you will also find a small shipbuilding industry. Fishing is the major activity in the area where fishermen bring home their everyday catch before it is sold to the restaurants and shops.

Santa Pola offers a variety of delicious food, mostly derived from the sea. It has many quality restaurants with chefs specializing in local cuisine such as crayfish, squid, red prawns, paellas, fish stews (caldero santapoler is a local fish stew which you must try), sweet pastries and home-made ice-creams. Some of the famous local catches include Anglerfish and Cuttlefish as well as octopus. Local bakeries make ample sweets and cakes as well.

This is a perfect place for food lovers!

Santa Pola has numerous important festivities where tourists and locals become involved. The year starts with a lively and noisy fiesta to break the winter monotony. In March and April, they celebrate the Mig Any or half year pageants of the Moors and Christians. In June, there is a Romeria or pilgrimage to the hermitage on the cape and before mid-Summer, on 26th July, the local sailors honour their patron saint, La Virgen del Carmen. The highlight of the year in Santa Pola happens between 1st and 8th September where they pay tribute to La Virgen de Loreto. You will be able to see street processions, parades and big parties. The year is brought to a close on the 10th December with the arrival of the Mother of God by sea.

There is also a parade on Christmas Eve where the kids can see Santa on his sleigh and on the night of the 3 Kings, 5th January, the local dance clubs strut their stuff and the 3 Kings are paraded through the street. 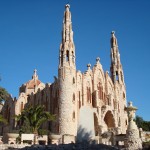