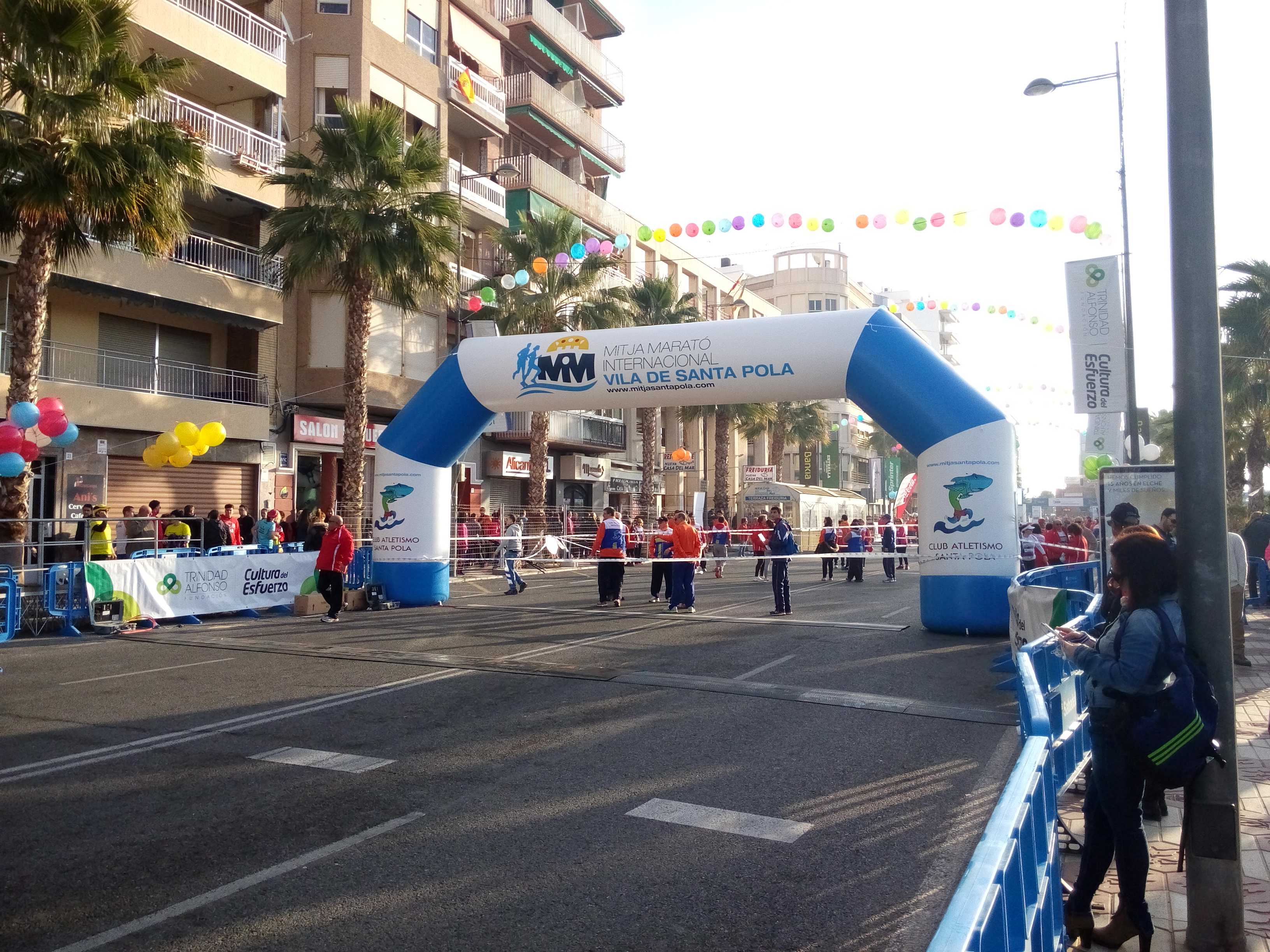 The first thing you notice on race day is build up of traffic heading towards Santa Pola from every direction, as tens of thousands of runners and supporters, from all over the country, make their way to what must be, one of the best running events in Spain. The whole of Santa Pola is taken over with a carnival atmosphere and a great feeling of camaraderie. The place just positively buzzes. 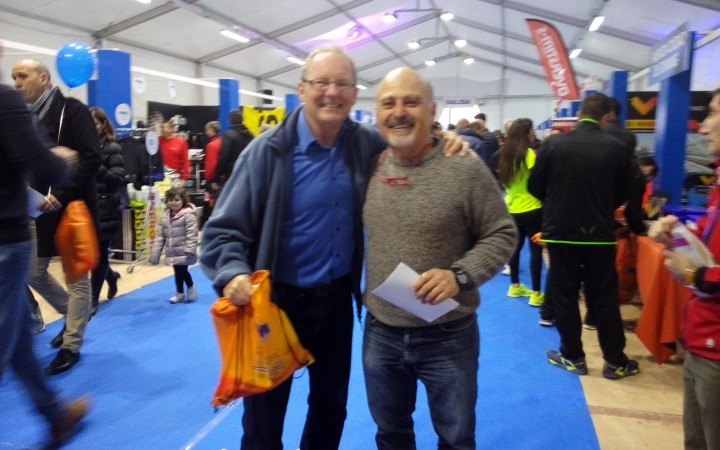 It all started in 1990 with a field of 324 athletes and has grown steadily since then with over 9000 athletes now participating. This year’s winner was Kenyan Morris Munene Gachaga who finished in a time of 1hr, 01mins, 02secs. The female category was won by Kenyan Polline Wanjiku in a time of 1hr, 10mins, 25secs.
There is an amazing amount of organisation behind the hosting of this event with a dedicated team which brings this to fruition ever year. The planning starts early in the year, and one of the main characters involved in developing the event over the years is Jose Manuel Blasco, from the Tourism Information Counter in Santa Pola. He is one of the nicest, most genuine people I know, and his enthusiasm for the event and all things Santa Pola is legendary. I came across Jose at the Sports village on the weekend of the Run, and as always he showered me with compliments and goodwill.

I participated in my first Santa Pola half marathon back in 2010 and was immediately hooked. The course, the organisation, the entry fee, the “all inclusive” atmosphere, are excellent. Santa Pola certainly pulls out all the stops for the 3rd Sunday of January. I have probably participated in 30 or so half marathons over the years (I ran the first Great North Run (GNR) in 1981 and recently participated in the Penang Bridge Half Marathon (Malaysia) and the Standard Chartered Half Marathon in Singapore), but the Santa Pola event is the best ever and I am proud to be involved in such a great event. 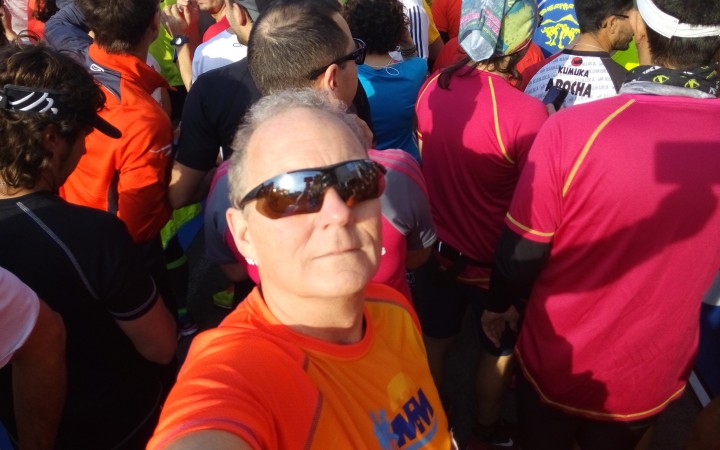 The day starts with a drive into Santa Pola, parking the car, and then joining the crowds, as they meander through the streets towards the harbour front or the Glorieta. Cafes and restaurants are thronged with runners and spectators, there is hubbub of excited chatter, and a feeling of anticipation in the air. The race starts opposite the Miramar Restaurant, where 9000 athletes are herded into the start enclosure, the elite athletes at the front to allow them a free run. From the rear of the start line it can take 3-4 minutes to cross the official start line. And then you are off. 21km in-front of you. The crowds of spectators line the route cheering the runners every step of the way. The route heads south to Playa Lisa, before turning back towards the harbour and onto Santa Pola East, before turning round and heading back through Varadero into the town and back out to Playa Lisa, before turning back again for the last 3-4km to the finish line opposite the Miramar Restaurant. Music is ever present with probably 8 bands playing along the route, not to mention the percussive bands and the piped music coming from the bars and restaurants. The irony wasn’t lost on me when I reached the halfway point at the anchor at La Cadena in Santa Pola East, the band was playing “I Will Survive”. Ha ha. I had already heard Spencer Davis, “Keep on Running”. It is worth mentioning, at this point in the race , the eventual winners had finished. At 11km there was a drinks station, so a quick drink, head up, and battle on to the end. After crossing the finish line, you are again herded into the finishing enclosure, where you can refuel, rehydrate and stretch out with your fellow competitors. Cake, nutri-bars, soft drinks, fruit, even beer is available, free at the end, accompanied with plenty of back slapping and hand shakes with complete strangers. What a great way to end a race. 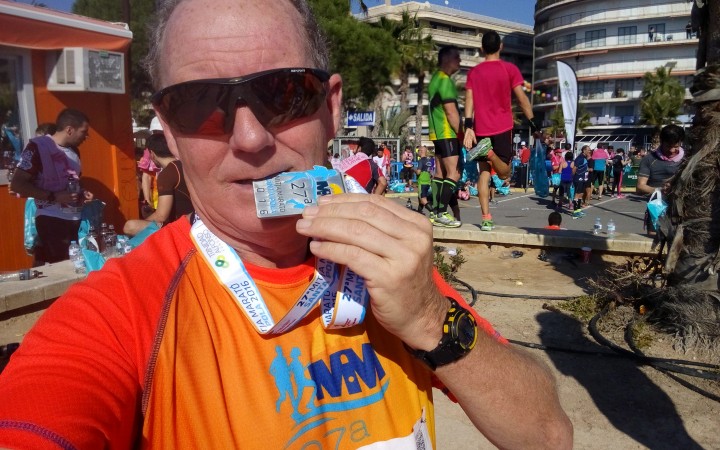 The days of running “good” times are now behind me. My motivation is to participate and complete the half marathon, especially one that takes place on the third Sunday of January as I have to keep focused over the winter months to keep fit and not over- indulge during the festive period during which you have to contend with well meant advice from friends, family and strangers, along the lines of “I hung up my running shoes years ago what is someone of your age doing running that far?”. These prove to be great motivators as you set yourself goals to prove you can still “do it”. It would be untrue to say I enjoyed the run on the day. A lifetime of physical activity brings with it worn out bits of body which hurt when you run, but without doubt, at the end I feel satisfied and, overwhelmed with a sense of achievement. January 2017 is already in the diary, but before then is the small matter of the Santa Pola 10km race on Saturday 4th June. If 21km is too far for you, this is a lovely little run around Santa Pola. Whether you are thinking of running the 21km or the 10km, go to see Jose Manuel Blasco and he will give you the contact details. If running is not your thing, come to Santa Pola on race day and enjoy the atmosphere and give us runners a cheer. It will be a fantastic day out.

“I took part in the Santa Pola half marathon this year and what an amazing event it was. Having also taken part 2 years ago with some friends, I found the atmosphere even better this time around. I trained hard for this event and came over especially to take part. I was very pleased to come second in my age group (65 lady) and I was presented with an enormous cup! Spending several hours in the Spa in Gran Alacant on the Monday and I wasn’t even sore or achy after that . I’m looking forward to next year”. 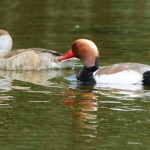 What's that in the Clot? Previous
Benidorm Next 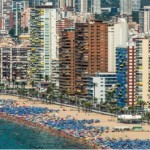