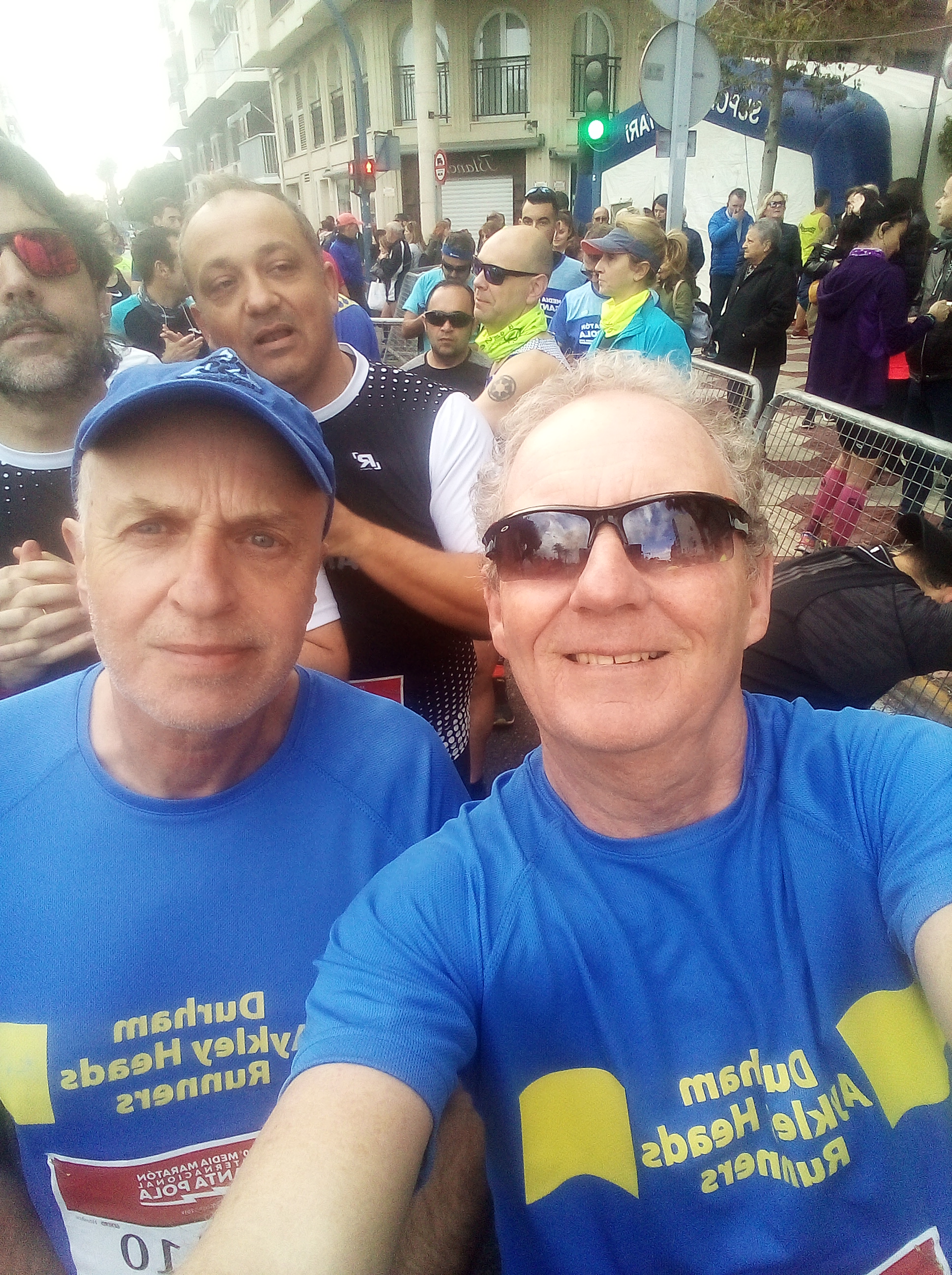 Santa Pola Half Marathon 2019 I ran my first half marathon in 1981 (The first Great North Run-GNR) which attracted a field of 12,000 runners. As the years went by the demand for places increased and so the numbers of participants rose to it’s current level of approximately 55,000 making it the largest half marathon in the world. In the early years it was fun but I stopped running it because it became too big. There were times when you could expect to walk large parts of the course due to the vast number of people taking part.

About 10 years ago, I discovered to my surprise that Santa Pola staged a half Marathon every January, so wanting to be involved with my new local community, I entered. What a delight. The entry cost was 20% of GNR at Euro13, the number of participants was 8000, the administration was excellent, the course is flat, hugging the coast of the Mediterranean Sea, with thousands of spectators lining the streets to cheer on the athletes. I found out afterwards this was about the 21st time the event had been staged and was generally regarded as being one of the best half marathons in Spain, if not Europe. I was hooked from day one and running the Santa Pola Half Marathon is upmost in the “Must Do” list every year.

One of the benefits of running in January, apart from the weather not being too hot, is the need to train over the winter period. It is still possible to enjoy Christmas and New Year celebrations but to prepare properly, there is an element of abstinence required. You don’t need the New Year’s resolutions of “This year I am going to the gym”, I am going to get fit”, or “I need to lose weight” because you are doing all these things anyway as part of your training and there is no guilt trip at the end of January when you stop it all, well some of it.

This year the run was held on the third Sunday of January, and Santa Pola, as it does every year, pulls out all the stops to make this a first rate event for competitors and spectators alike. A big thanks goes out to all those involved in the organisation and sponsorship of the event especially Santa Pola Ayuntamiento, Educanova Consultores S.L. and Empresa White go for it. 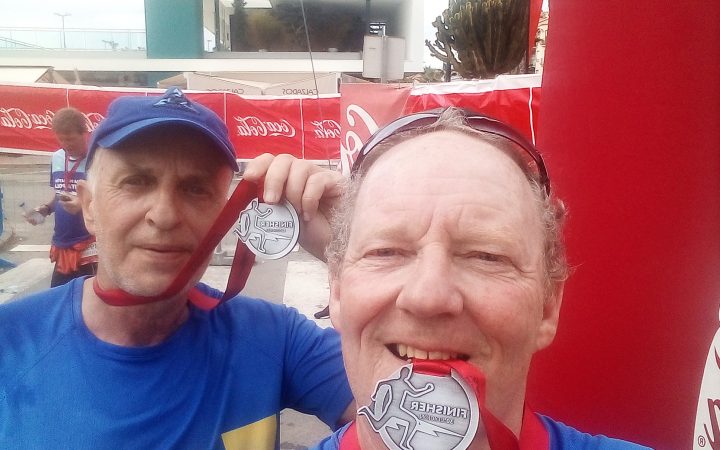 enjoy the occasion. Along the route thousands of people line the streets to shout and encourage the competitors. I remember one year I was running alongside the Castle when the crowd was shouting “Animo” which I thought was “animal”, meaning, they thought I was a beast, to which I punched the air letting out a large growl saying “yeahhh”. Every time they shouted “Animo” I responded with a growling Yeahhh. It was only after I finished that I was told that Animo was an encouragement roughly translated to “Keep Going”, but I preferred my version of the saying. I still do.

Music is a constant back drop along the route as many bands, (Rock, Metal, percussive, etc) play at regular intervals, and in some places, local residents bring their HiFi’s into the streets to blast out music to add a little more atmosphere to the event.

The weather on Sunday was ideal for running in and the rain kept away until after the run. Along the route we met other Brits, Lithuanians, a Malaysian, Norwegians and many more nationalities, all of whom were cheered along the way by the crowd. The winner of this year’s run was Hassane Ahouchar from Morocco. The first female competitor to finish was Abbeche Mulugeta Gela finishing 11th overall. 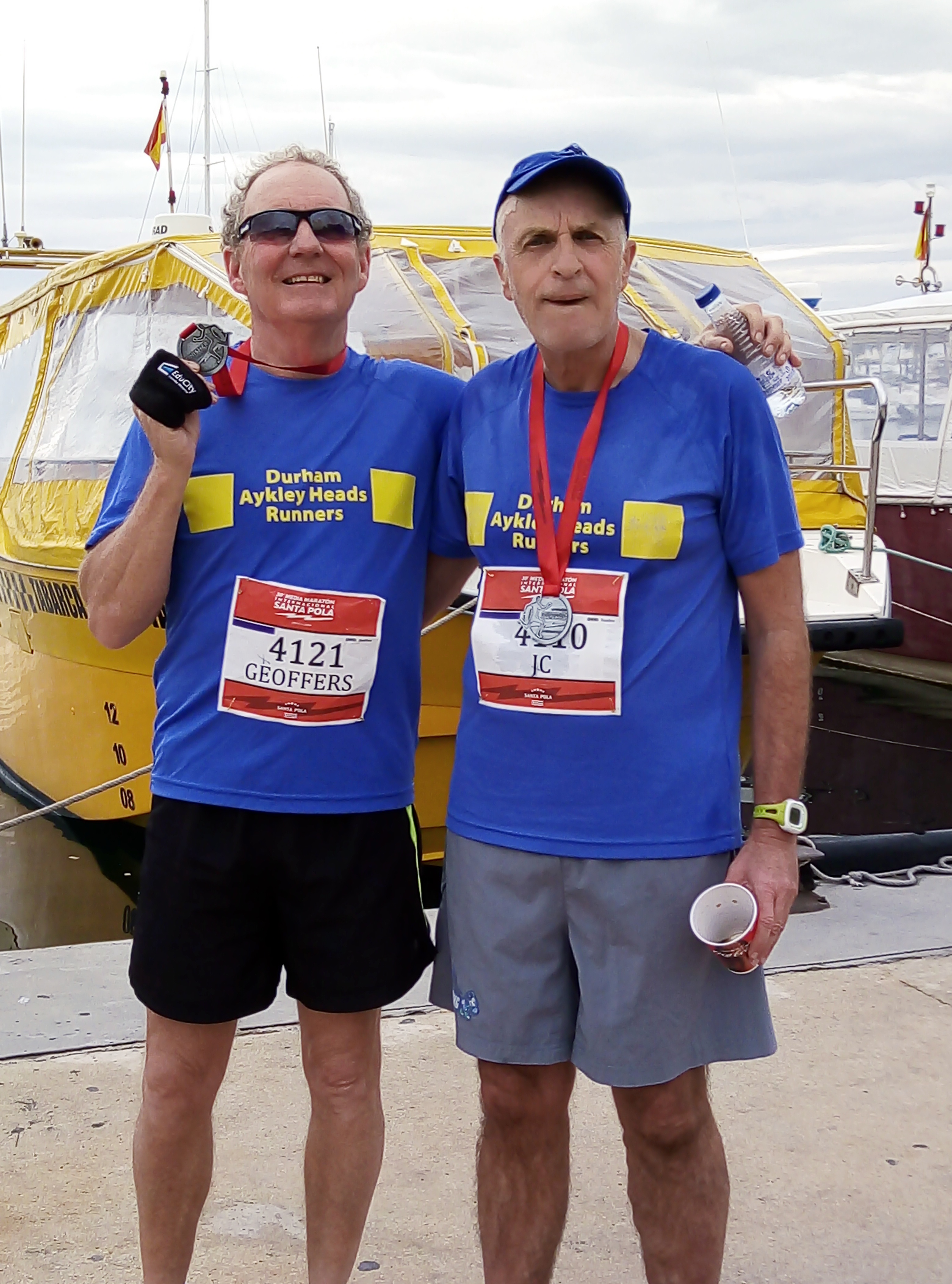 As for me, I was joined from the UK by my friend and running partner, John Curry (JC). John rounded of his training in the cold of the UK whereas I was able to take advantage of the good weather here in Gran Alacant to run many miles in preparation for the race. John is an experienced runner and has an in-built ability to run at a steady pace over a long distance, and having determined a nominal finishing time, we ran the course at almost equal split times and completed the course in 2 hours and 18 minutes, with an overall finish position of 3239 and 3240, but our positions in our respective age categories was 24th (GY over 65) and 73rd (JC over 60). 10 years ago when I was younger and fitter I thought I had a good chance of doing well in my age category, but the winner of my age category that year ran a faster time than I was able to run when I was in my 20’s. So much for my expectations of finishing on the podium. Now I am pleased to get round in one piece but I still respond to shouts of “Animo” and with that I will be planning for next years half marathon! 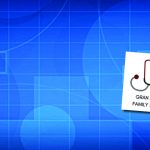 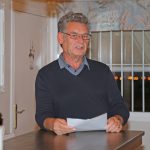