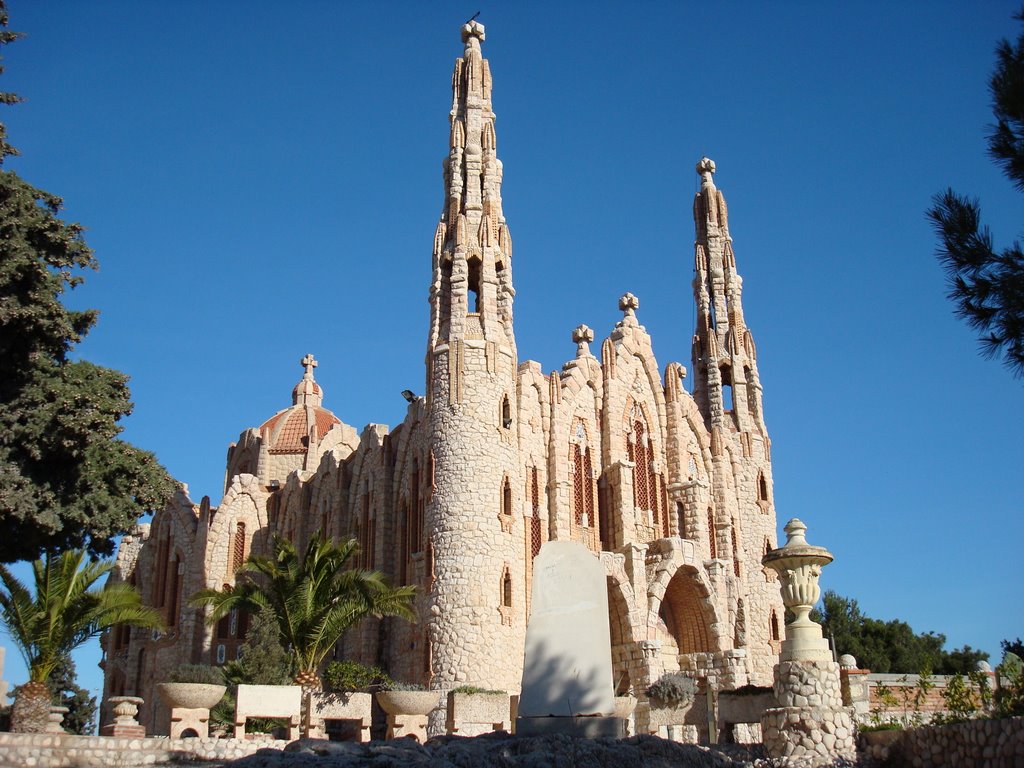 In the south of the community of Valencia is the city of Novelda. It borders with Elda and Petrel to the north, Monforte del Cid in the east, La Romana and Monovar in the west and Aspre in the south. It forms part of the county “Medio Vinalopo” which is also known as “The Grapes Valley”. It is 17 km away from El Altet International Airport and 28 km from Alicante city. It is 165 km away from the capital city of the Autonomous Community, Valencia. It covers a surface area of 76 km2 and in 2014, had a population of 26.378.

Novelda has a dry Mediterranean climate with enjoyable temperatures ranging from 14º C in winter and up to 22º C in summer. The maximum rainfall is no more than 400 mm of rain per year.

Monoculture of grapes, manufacturing and processing of marble and natural stone are the most vital activities in the region. Other important business is food, specializing in packaging and marketing of spices, seasoning and teas. The parades of Moors and Christians are celebrated between the 18th and 25th of July while the feast of Santa Maria Magdalena is held on the 22nd July.

Castillo de la Mola or La Mola Castle is situated on a small hill beside the Sanctuary of Santa Maria Magdalena, about 4 kilometres from the town of Novelda.
Built in the later 12th century, the castle is of Islamic origin. It has a polygonal structure with eight square cubes overhanging. At present, only four remain, two of which are covered up. They feature a square tower inside which today is missing its top, made from adobe on a masonry base.
The existing tower measures 11m high by 9m wide. In spite of it missing a floor, the room beneath is lit by a barbican. Entry to the tower is through a half-mesh door at the top.

When the Elche Pact in 1305 was signed, the Castle and its neighbourhood were passed on to the Aragonese Crown forming part of the Kingdom of Valencia. It was then turned over to Doña Blanca d’Anjou, Jaime II’s wife who commanded the rebuild of its crumbling walls. A series of transformations were done during the 14th century and an exceptional triangular tower was constructed on the castle’s north-eastern side.

The tower is 17m high by 15m wide and it is very unique in its kind, as nothing has ever been built similar to it. It is built of masonry, with ashlar reinforcement in the recess.

The Aragonese King, Pedro the Ceremonious, granted tenancy of the Castle to the Breton noble Beltrán du Glesquin in the mid-14th century as payment for his assistance in battle one year after coming to the Iberian Peninsula with the White Companies. In 1367, it was sold to Hugo de Calviley, who then sold it to Mateo de Gornay then Lord of Novelda in 1371. Years after, it was handed over to the Crown, being given by Pedro IV to his wife Dona Sibila de Fortia.
Don Pedro Maza de Lizana, Lord of Mogente and Chinosa, bought La Mola from Dona Violante de Bar in 1391. It then became the Barony of Novelda in 1448. La Mola afterwards formed part of this significant House of Lords until the feudal estates were eradicated in the early part of the 19th century.
Today the castle is in superb condition to be admired and appreciated for what it is, a structure with great historical and cultural interest for the inhabitants of Novelda and the province of Alicante in general.

It was also declared a Historical Artistic Monument of National Interest in 1931.

Saint Mary Magdalene sanctuary is considered to be the most significant attraction for visitors. This ecclesiastical structure was built as part of an undertaking managed by Novelda-based engineer, Jose Sala in 1918 who inspired his project with the Catalan Modernist way.
The main frontage has two 25m high side towers which end in a stone cross, also present on the cupola and upper arches of the façade. The adorning designs have their origin in medieval and Baroque styles. These influences helped the architect to mix pebbles from the Vinalopo River with bricks, red bricks, polychromatic tiles and masonry work as shown all over the exterior of the edifice.
The outside is more impressive than the inside. The building’s interior consists of a rectangular unit with two connecting side areas. Situated at the recess, in the apse is the side chapel for Saint Mary Magdalene who is the patron saint of Novelda. And behind the altar you will find a beautiful painting attributed to Gaston Castello.

Belonging to the Excmo, and now housing the offices of the Mayor of Novelda, is the Gomez-Tortosa Cultural Centre. The building displays the grandeur of the modernism of the city’s private houses. This property of three floors was constructed in the last third of the 19th century which endured a deep revamp and expansion of its plant in 1901.

This structure was founded as a family house and was the Gomez-Tortosa Count’s residence. Even though its exterior feature is not that impressive due to the architectonical composition of the 19th century, it is the inside that is notable. It gives fine examples of decoration and typical distribution of the bourgeoisie’s houses of the 20th century.

What reflects the elegant modernist quality of the era is the arches, point up columns and cast iron gratings, oval hole stair, skylight, surrounded patio by Corinthian style limestone rock columns on base of red marble of the zone, the tapestries room painted by Lorenzo Pericás surrounded by base of oak tree carved with polychrome tiling, chapel, furniture of that age and other elements.
Address: Carrer Major, 6, 03660 Novelda, Alicante, Spain
Phone:+34 965 60 90 53

This structure was commissioned by its owner Antonia Navarro Mira to architect Pedro Cerdan Martinez in the early 20th century. The museum is dedicated as an architectural gem, a wonderful mansion.
The dwelling or accommodation is now the property of the Savings Bank of the Mediterranean (CAM). It consists of three floors. It highlights the work of gratings in windows and balconies but it is in the inner part of the building where it has developed its own elements of modernism as seen on the carved woods, crystals, stuccoes, paintings in ceilings and murals, marbles, epoch furniture, etc.

This is a two-storey building composed of big rooms for conducting gatherings and games. It is excellently adorned with craftwork such as lovely paintings on the walls and its ceilings. The casino was built in 1888 as the world’s most expensive destination and is now a type of club for the richest people in town. Its 7000 sq. metre garden is surrounded by an iron fence set in stone and located in the centre is a pavilion for holding musical performances.
You may stroll through the external facilities which are free and charming. Sit on a bench and grab a bite to eat in several shadowy areas and enjoy the Mediterranean climate.

In 1953, construction of the church of San Pedro began and it has seen numerous transformations executed over the years including the restoration of the main façade in 1740 where Baroque features were added and the erection of the Aurora Chapel in 1742. A new belfry was founded in 1910.
Address: Plaza de España, Novelda
Phone numbers: +34 965 600 482

The building’s facade which dominates the structure is a common example of the 17th century civil architecture in Valencia, both plain and solid. The double arched patio was where the market used to be held
Unveiled in 1913, you will find the statue of Jorge Juan y Santacilia just opposite the Town Hall, in the centre of Plaza de España.
Address: Plaza de España 1, 03660 Novelda, Alicante, Spain
Phone:+34 965 60 26 90

Situated on the second floor of the Casa de Cultura found at number 3 Jaume II Street, is the Archaeology Museum. .
It consists of an exhibition room, didactic activities room, central office and specialized library.

Exploring the exhibition room will make you aware of the historical evolution of the population that have lived and settled in Novelda since the prehistory up to the present.

A good example of this can be seen in the important pottery collection belonging to the Bronze Age, shown in the museum.
Written documents serves as proof of the Iberian Culture, land and people afterwards turned into Roman costumes, as well as archaeological materials discovered and shown in Novelda.

You must not forget to look at the ceramic collections belonging to the modern age of 17th-19th centuries. The ceramic ecclesiastical altarpieces complete the collections being exhibited in the museum.

The religious history is displayed by a remarkable selection of dioramas. You can see and admire the dedication and delicate detail, full of tenderness and love, that the creator of Nativity scenes of Novelda have made including precision, mastery and generosity.
The Nativity scenes makers Association of Novelda offers its visitors selected works carried out by its members.
You will also find here monumental pieces of large proportions, dioramas of the life and passion of Jesus, diverse artistic display of great beauty that utilize the Nativity scenes as a main motive, figures of diverse authors, epochs and nationalities and an extensive photographic exhibit of the works rewarded in the contest that the association arranges yearly for Christmas. 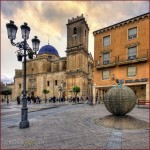 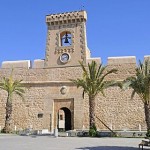