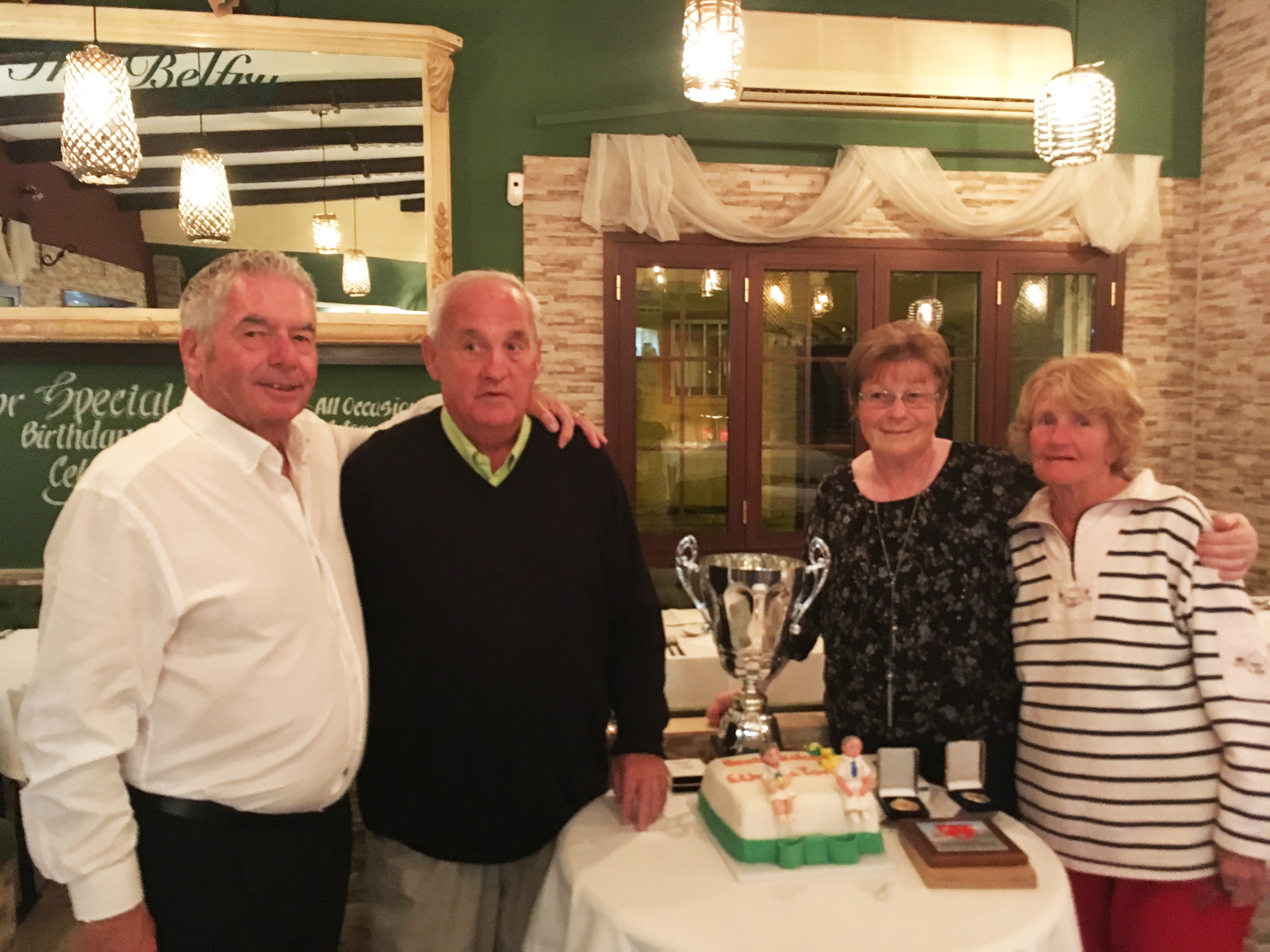 Sponsored by The Belfry, The Pub, Bowling Abroad and Avalon 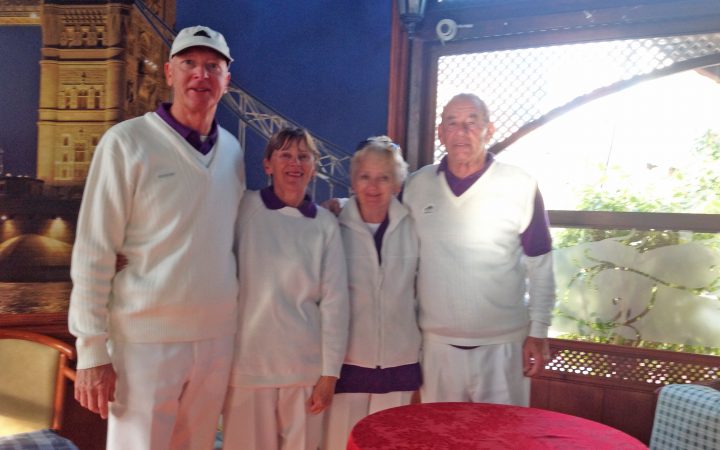 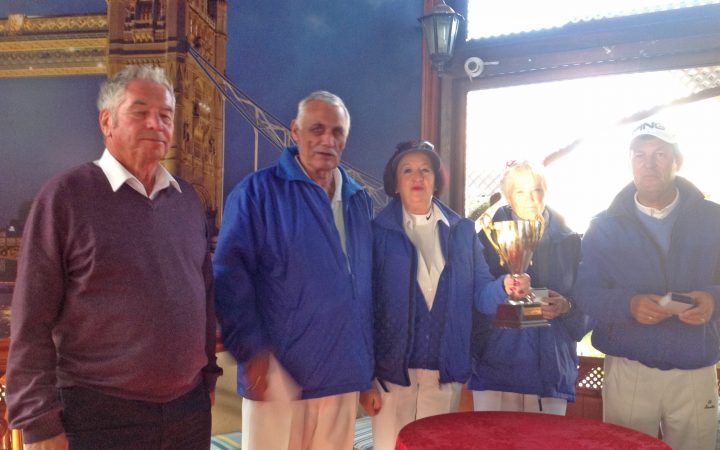 On the weekend of 18th and 19th February we held our annual Mixed Open competition. We had twenty four teams involved with each playing two games per day. Well done to the winning team from San Luis, June and Keith Jones, Sabrina and Russell Marks. The runners up from Indalo were Mo and Alan Deboer, Lois and   Richard Swain.

Also well done to our Monte Mar team Ronnie, Val, Pauline and Barrie on reaching the semi finals. The cake stall was once again a great success, everything was sold by lunch time. Thanks must go to the organisers and helpers for all their hard work.

The monthly Dinner Dance was held on February 28th at the Rincon attended by fifty-two members. Entertainment was by the popular Andy, who had most members up dancing. A good time was had by all!!!! 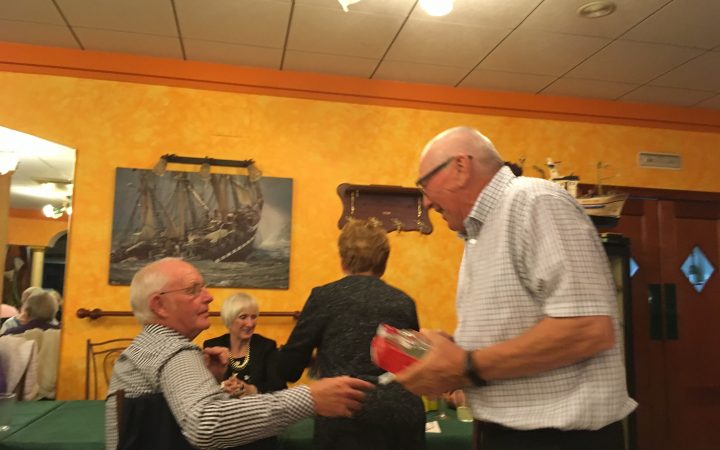 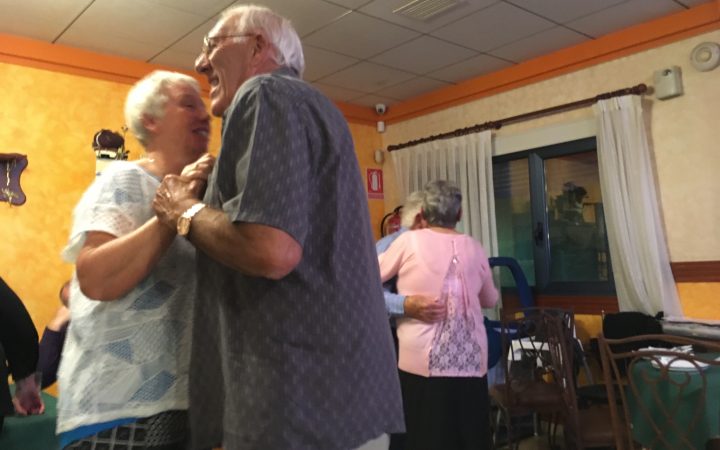 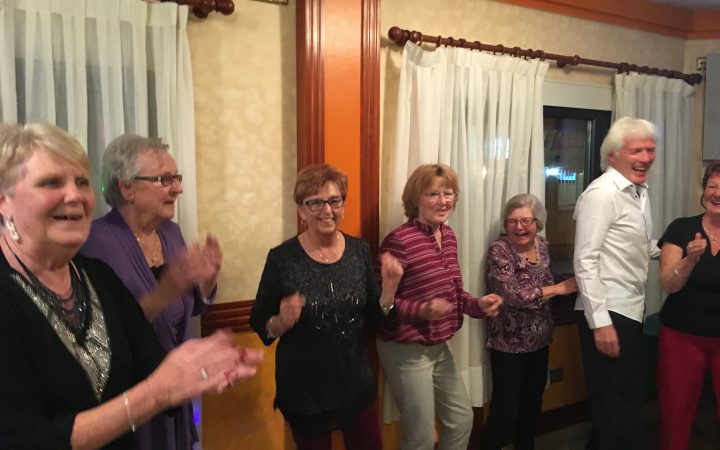 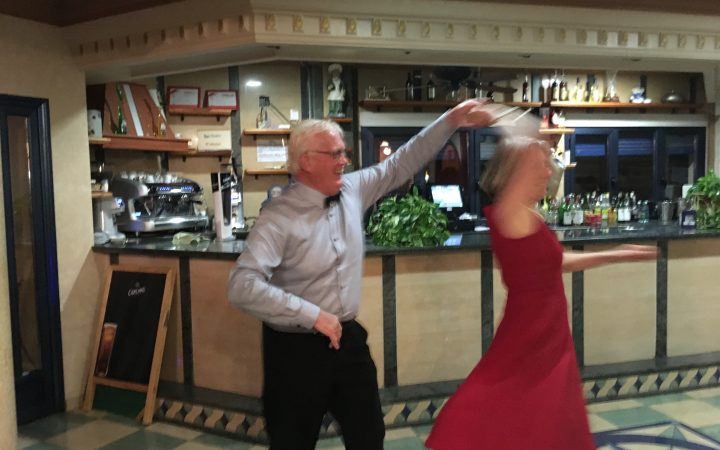 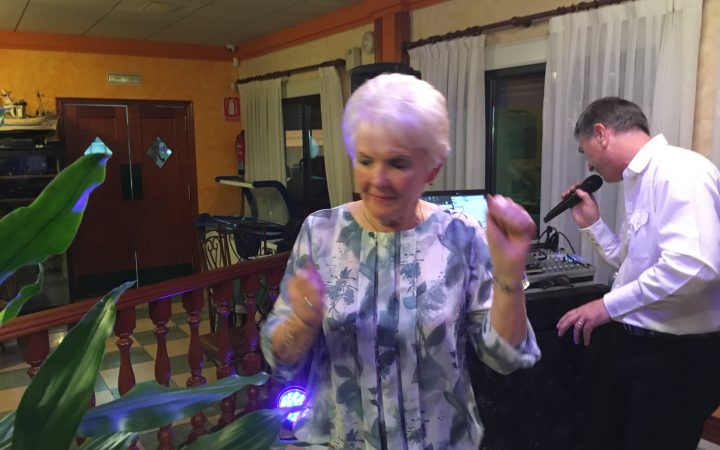 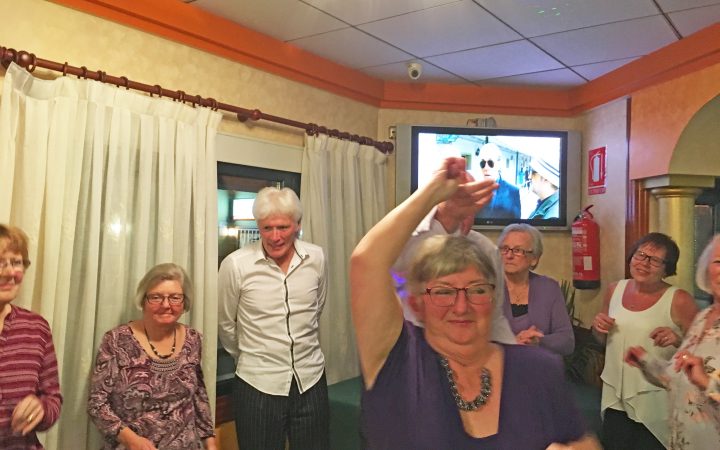 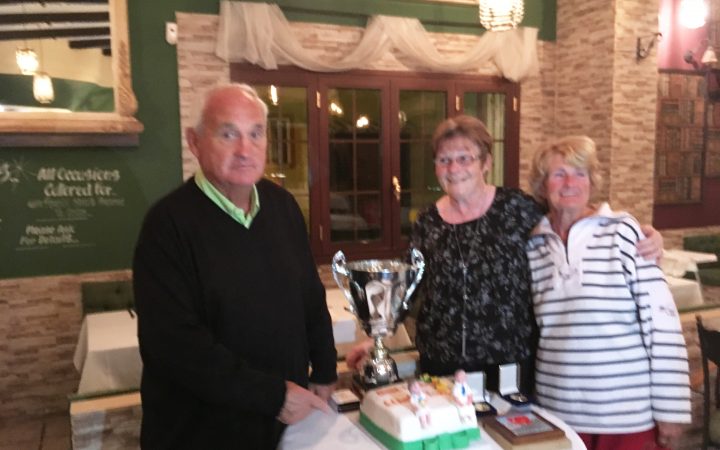 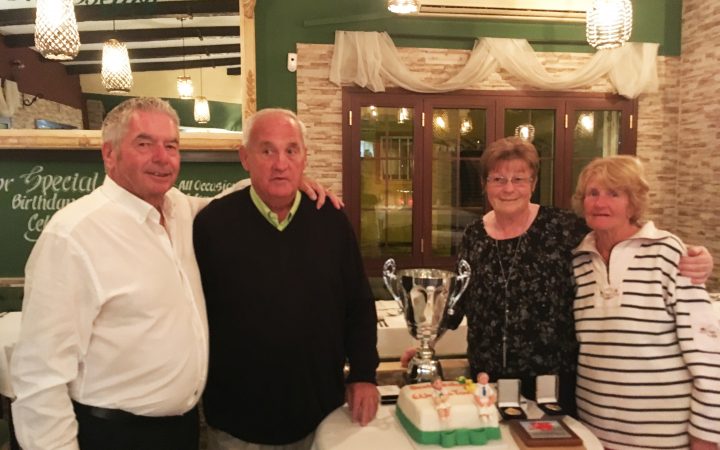 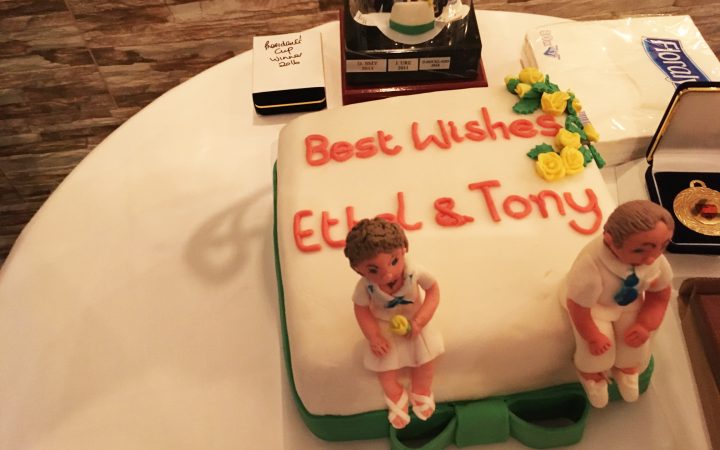 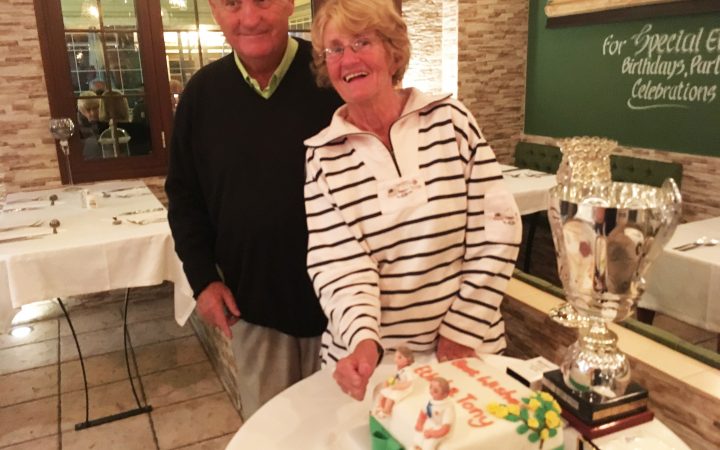 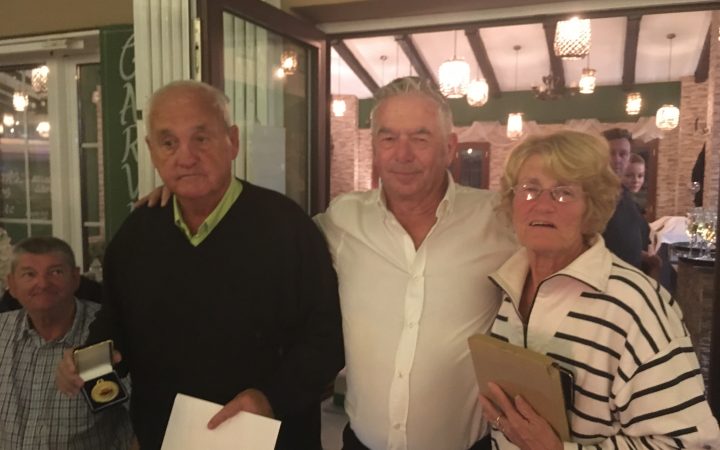 More than fifty members attended a Club Farewell Dinner for Tony and Ethel who have returned to the UK because of Ethel’s deteriorating health.

The dinner was held at the Belfry restaurant, a big thank you to Paul and his team for there contribution to a great meal and service.

Vice Captain Jan Gatward made a lovely cake in appearance and taste, she also presented Tony and Ethel with 120 pounds collected by members for them to buy a present in the UK. Club Captain Ronnie Cairns presented Tony with the Presidents Cup which he won this year.

Club Chairman Chris Harding spoke about the support Tony and Ethel had given to the club in their time as members and expressed best wishes to them from all members. Chris also presented them each with a special medal and plaque to remind them of their time at Monte Mar.

Tony made a short speech thanking everyone who contributed to the evening which had been a lovely surprise for them both, and confirmed how much they had enjoyed their time at Monte Mar.

The evening ended with a toast to Ethel and Tony.

Friday 10th March was sadly the last game for Tony and Ethel for the Matadors. Tony was skip and the trio had a close game with their opposition. They were in front most of the game, but the opposition staged a comeback and it was all square on the last end. When it was the skips turn to bowl Tony was five down and it was looking bleak. Tony, never undersold, launched his last wood into the head. It bounced off a couple of woods and dropped very neatly next to the jack giving Tony’s team the game by one shot. They say, “you always remember your last wood”, well Tony certainly will. It will go down as “TONY’S LAST STAND”

With limited resources (a squad of twenty players) the season went well, both on Mondays and Fridays. We struggled at the beginning of the season in both leagues. But the last five weeks we pulled off some good very results, resulting with us finishing 8th on Mondays and 7th on Fridays.

Thank you to all Matadors players who turned out for me and a big thank you Vice Captain Gordon Fisher and third selector Joe Ridley.

Quite a good season for the Toreadors. Like the Matadors we often struggled for players, but we had some very good results. We finished fifth on Mondays and fourth on Fridays.

Well done to all the Toreadors and thank you for your support. Also thanks to Jan Gatward Vice Captain and Les bounds selector.

We held our end of season lunch at Maritaos Kitchen Gran Alicant it was well attended and everyone had a very enjoyable afternoon.

We’re at the end of another Fed Fours season and I would like to thank all the players who have played for the Picadors. We had good days and days not so good but what we have done is enjoy the game and the camaraderie between our squad and the opposition. Congratulations to the winners of our division and many thanks to Ken Hope (San Miguel) for running the league.

For further information about Monte Mar Bowls and Social Club check out our website  www.montemarbowls.com or email us at info@montemarbowls.com. We are also on Facebook. 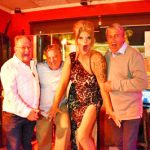