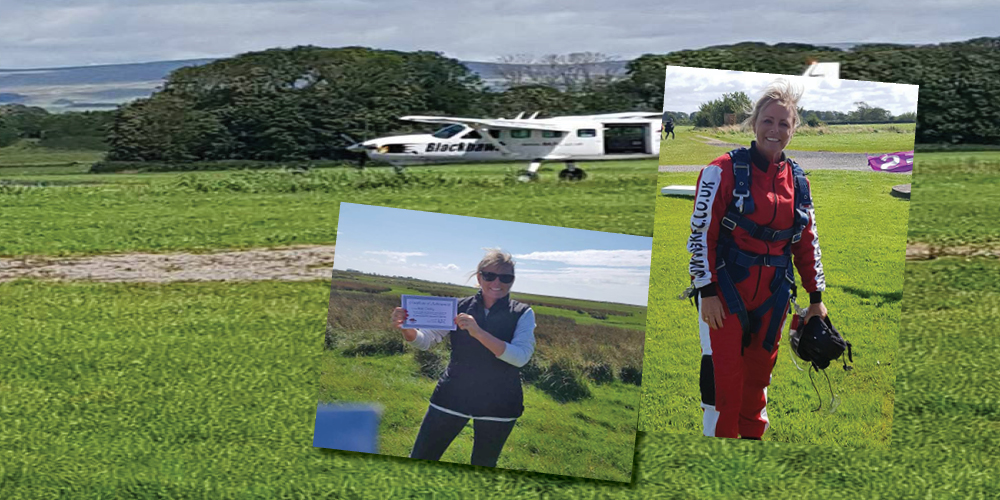 Local Legends by Luke Martin Jones
Kim Carey
When Kim Carey isn’t selling houses for ‘Gran Alacant Property Needs,’ you will find her jumping out of a plane at 15000 feet. Kim has a bucket list and skydiving was on her tally of things to do; one challenge, Kim is glad to cross off her inventory, one provocation, she will not be repeating. 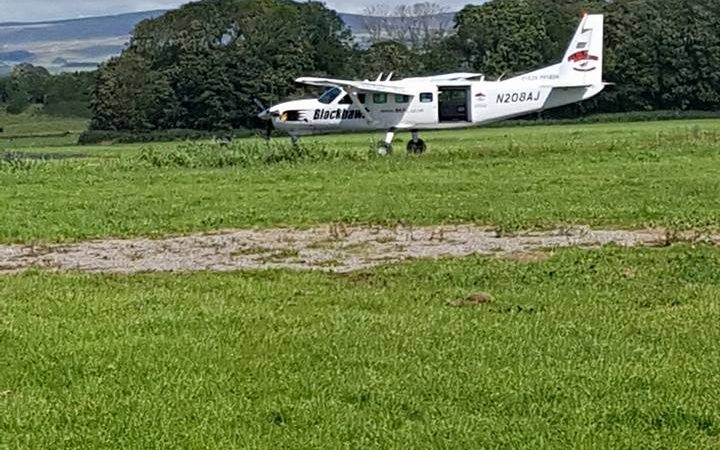 Having reached the age of 50, a close family member decided to arrange this surprise challenge of a lifetime; an ambition that most of us wouldn’t even consider, certainly not me. With her skydive booked, Kim wanted to complete her mission, with purpose, leaving an enduring legacy. Through personal experience, Kim decided to raise funds for the ‘Stroke Association,’ a charity based in the UK; an invaluable resource for all those living through the recovery from a stroke, a debilitating ischemic attack. Kim raised over 1000€ for her efforts and would like to thank family and friends for all their support.
I was lucky enough to speak to Kim about her endeavours; she recalled with humour, her life changing experience, taking off in a small plane from Preston in Lancashire, wondering what she had let herself in for! 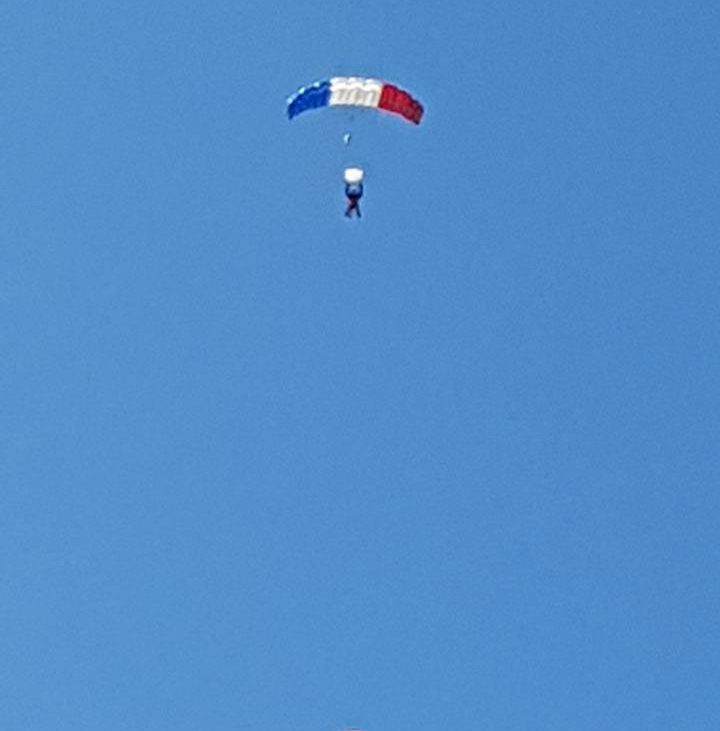 Initially Kim was given twenty minutes training, before her flight, To her consternation, she was told, in no uncertain terms, she would die, if she didn’t follow everything said to her by her instructor; there is no point sugar coating such a dangerous undertaking. Kim was scared and it was about to get scarier.
Her instructor Matty, A Para by trade, parachutist in his spare time, who she would be strapped to during the dive, began the process of attaching the safety harness to both of them, on completion, jokingly referring to a spare, dangling strap, that was not securely fastened; if Kim wasn’t worried already, she was now. Nerves in tact, just, she sat herself down on the edge of the opening to the plane, facing outwards, 15000 feet up. Kim had never been so frightened in her life 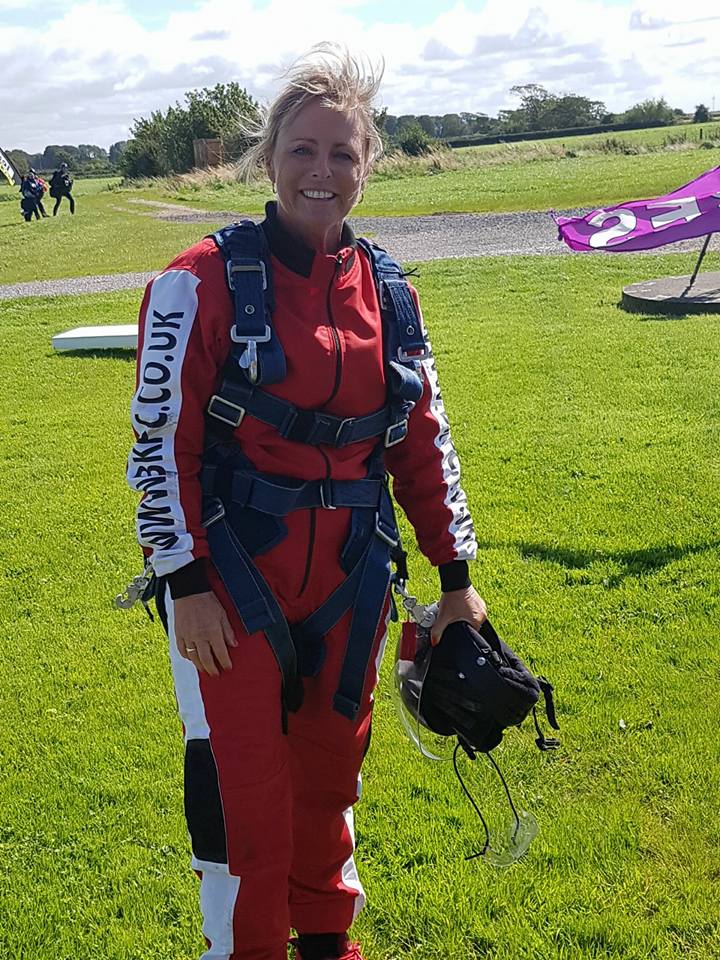 Jumping was exhilarating and traumatic at the same time; in free fall for one minute at 125 MPH, descending towards terra firma. Kim recalled seeing the rolling countryside of the Lake District, Blackpool Tower and the Pleasure Beach; everything felt peaceful and calm, unlike Kim’s nerves, plummeting through a cloud. Matty could feel her shaking, partly with fear, equally through the numbing chill. She couldn’t open her mouth as terror turned to shock.
As they approached the ground, Matty adjusted the direction of the fall, for safety reasons, due to the high winds. Kim landed flat on her back, instead of falling on her feet as expected. She laid there for about a minute, friends looking on anxiously, believing something had gone wrong. Finally she jumped to her feet, waving her hands in the air; all was well, Kim had completed her charity jump. 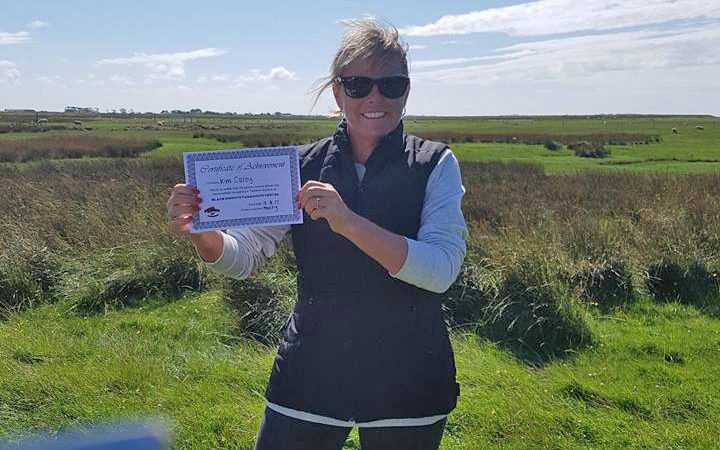 I asked Kim if she would do it all over again. Firmly, without hesitation, she said no and who would blame her. Offering advice, Kim was clear; be careful what is on your bucket list, if you have a Birthday coming up be mindful what you ask for. Kim’s plans for the future; a wing walk; I wish her luck! At least Kim’s fear of flying is now a distant memory, well done!
If you have a similar story, you would like us to feature in the Gran Alacant Advertiser, please get in touch!
info@granalacantadvertiser.com 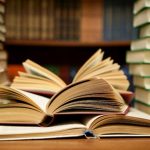 Biblioteca Gran Alacant Courses 2017/2018 Previous
What's that in a clot? Red Darter! Next