Explosion in a paintbox that is the Bee-eater 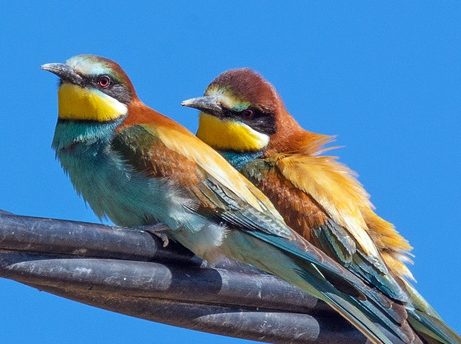 Last month I told you about the spectacular Hoopoe, one of the most distinctive birds of our area. This time, we’ll look at what is undoubtedly our most colourful bird, and it’s right here in the Clot right now. This is the explosion in a paintbox that is the Bee-eater.

They don’t occur in the Clot every year, but this year there are at least two main groupings – there are four or five birds hanging around in the high trees just to the north of the main pool, and there is a larger group near the centre by the large civil war bunker.

My picture shows an adult pair in full breeding plumage – as the summer progresses the feathers fade a bit towards the green end of the spectrum, but they are still a spectacular sight. Actually the easiest way to find them is to listen out for their calls, they are very chatty birds and have a distinctive liquid-sounding “Pruuiitt” call which carries a long way.

You are likely to see them high in trees, or as in this case on a telephone wire, where they keep watch for flying insects, sally forth and often return to the same place to eat it. As the name suggests, the major part of their diet is bees and wasps, but of course you wouldn’t want to swallow a whole bee without dealing with the problem of getting rid of the sting! The Bee-eater does this by bashing the bee against a hard surface (a telephone wire or branch will do) and scraping it along until the venom sac is removed. They also feed on other larger insects such as dragonflies, crickets and cockchafers, but they definitely prefer bees when they can get them.

Each year, they excavate a hole in a bank to lay their eggs, and will not re-use old sites, so they will search for new territories. This makes sense – you wouldn’t want to revisit a place full of old eggshells and last year’s droppings, would you? A nesting pair will often have “helpers”, these may be unpaired birds or even the offspring from previous years, who will assist with bringing up the current crop of chicks. Once fledged, the birds will gather in even larger flocks before they commence their migration away from our area to Africa, and towards the end of this month and through September, you might encounter large flocks in the countryside of more than 100 birds feeding up before commencing their long journey.

The birds occur annually in the UK in very small numbers, and over the past fifty years or so have managed to breed on about five occasions – when they do, this becomes national news and usually the nesting site is well protected by organisations such as the RSPB who allow people to observe them under highly controlled conditions. Fortunately, this is not required in Spain, where they are relatively common throughout the peninsula. You can see more photographs of birds from our area by visiting www.marketheridge.smugmug.com See you next month. 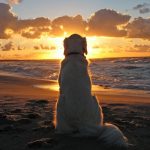 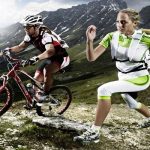