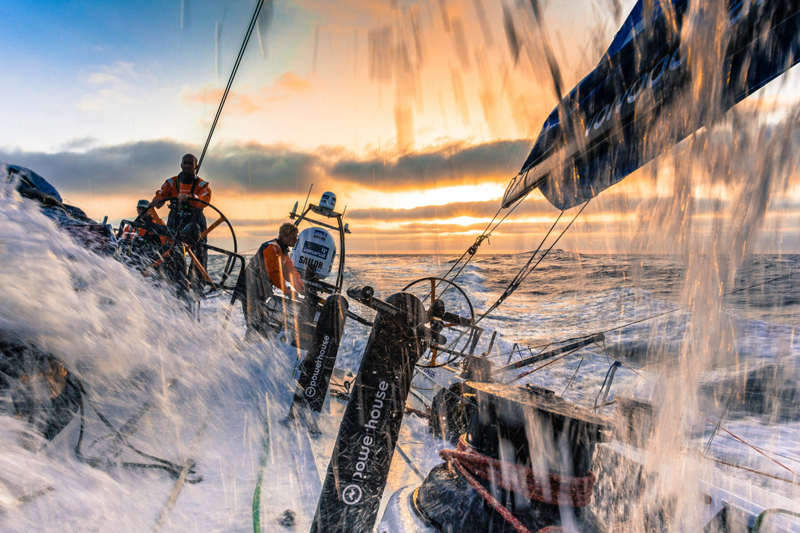 Hi , my name is Star and I have been lucky enough to call Gran Alacant my home for over 9 years now. My 7 year old daughter Ashlee and I are often “Out & About” enjoying the local attractions and culture in this part of Spain. Over the next few months I will be sharing some of our experiences with you to encourage you to go “Out & About” yourselves and maybe learn a little bit about this beautiful place we call home.

This month we wanted to invite you to join us for the start of the 13th Volvo Ocean Race which is starting from Alicante harbour on Sunday 22nd October. 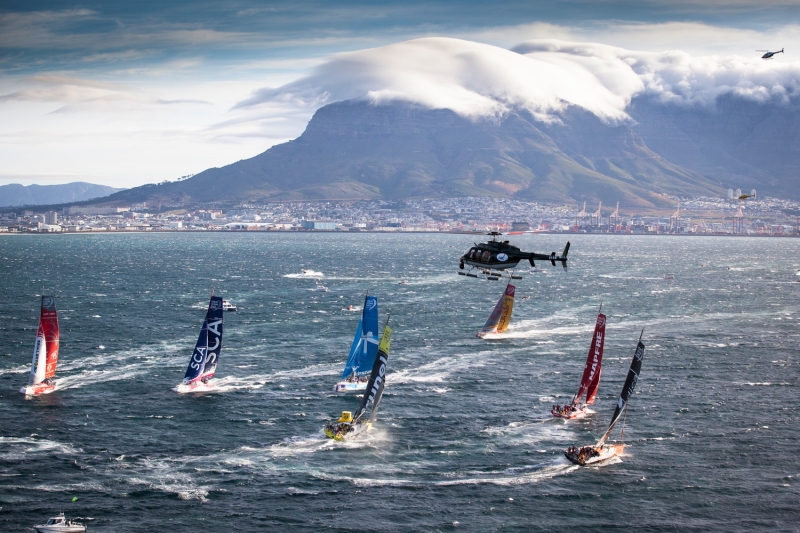 This iconic race first started in 1973/1974, when it was called the Whitbread Round the World Race, a total of 19 teams entered and the route covered 27,000 nautical miles. Subsequent races took place every 4 years until 2008/2009 when it switched to every 3 years. There have been 12 previous races, a total of 167 boats have taken part and this year a further 7 or 8 will join the elite list of racers. The previous Race in 2014/2015 was won by Abu Dhabi Ocean Racing whose Skipper Ian Walker was from Great Britain, their winning time was 146 days, 16 hours, 9 minutes and 21 seconds!!! 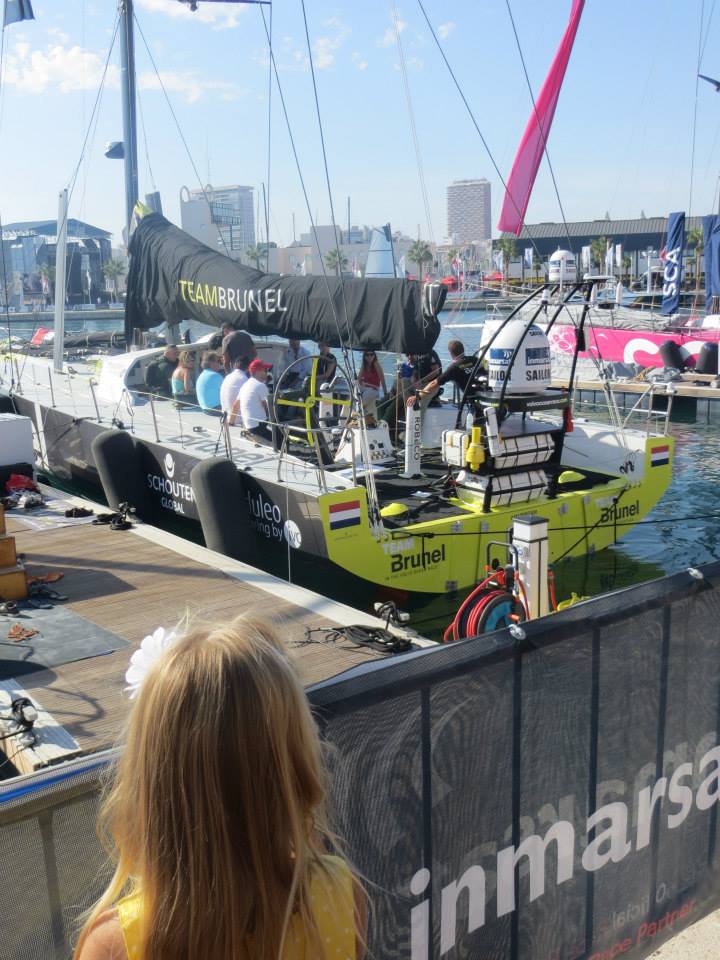 This year the focus is on the Southern Ocean and there are incentives for mixed crews that include both men and women. It is also going to be the longest course in the history of this Race, which covers a staggering 45,000 nautical miles, crosses four oceans, touches six continents and 12 Landmark Cities: Alicante – Spain, Lisbon – Portugal, Cape Town – South Africa, Melbourne – Australia, Hong Kong – Hong Kong, Guangzhou – China, Auckland – New Zealand, Itajaí – Brazil, Newport – USA, Cardiff – Wales, Gothenburg – Sweden and finish in The Hague – The Netherlands at the end of June 2018. 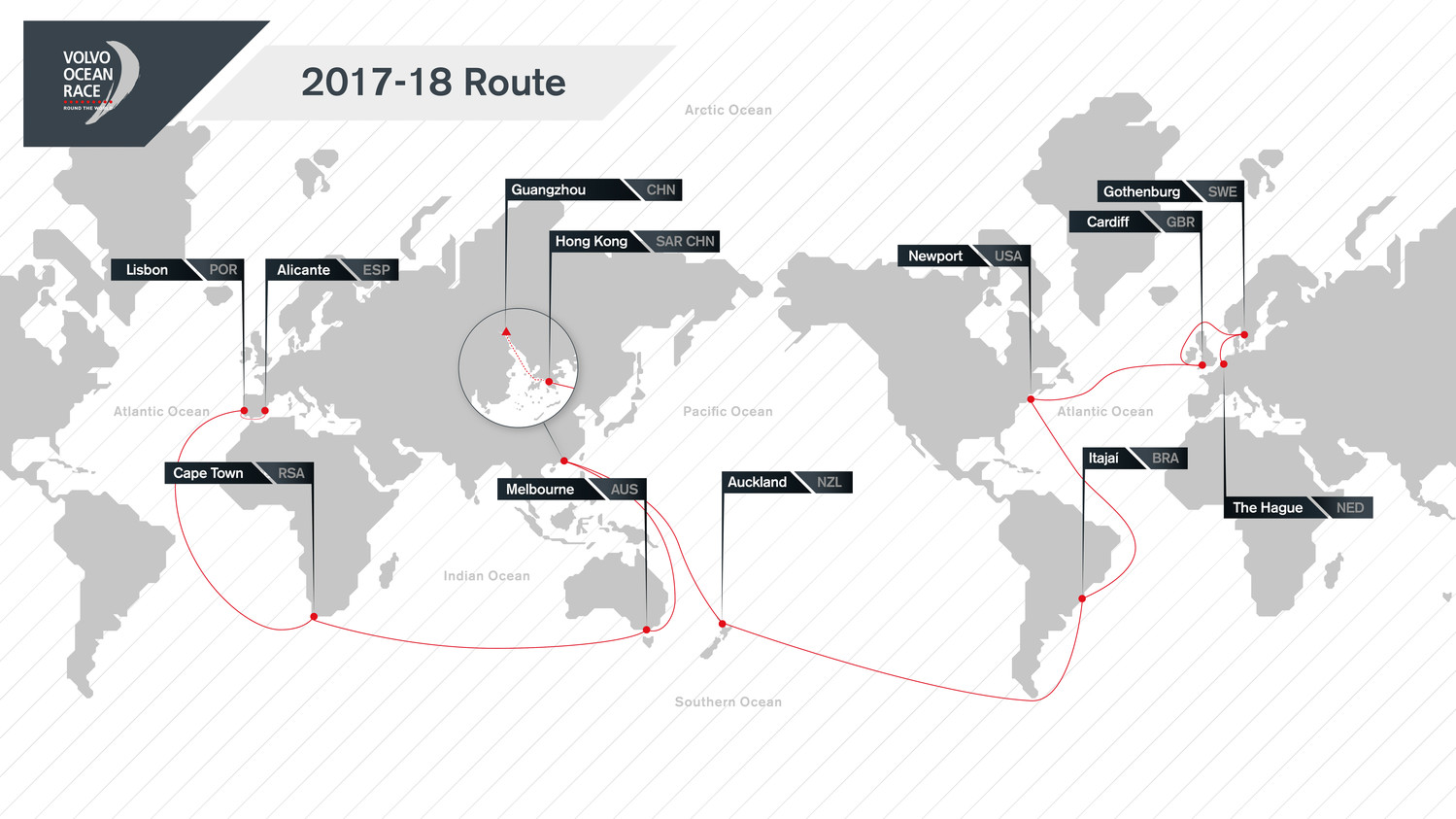 The latest version of the Volvo Ocean Race 2017-18 Route Map. The route will see the boats race three times more Southern Ocean miles than in recent editions,visiting 12 cities around the globe.

Another new aspect of the race this year is that for the last leg from Gothenburg to The Hague an additional group of Legend Boats will join the racers as they aim for first place. This additional Race has been called the Legends Race and is a celebration of the previous 12 races, as legendary boats and teams who have participated in the previous races, have been invited to take part. 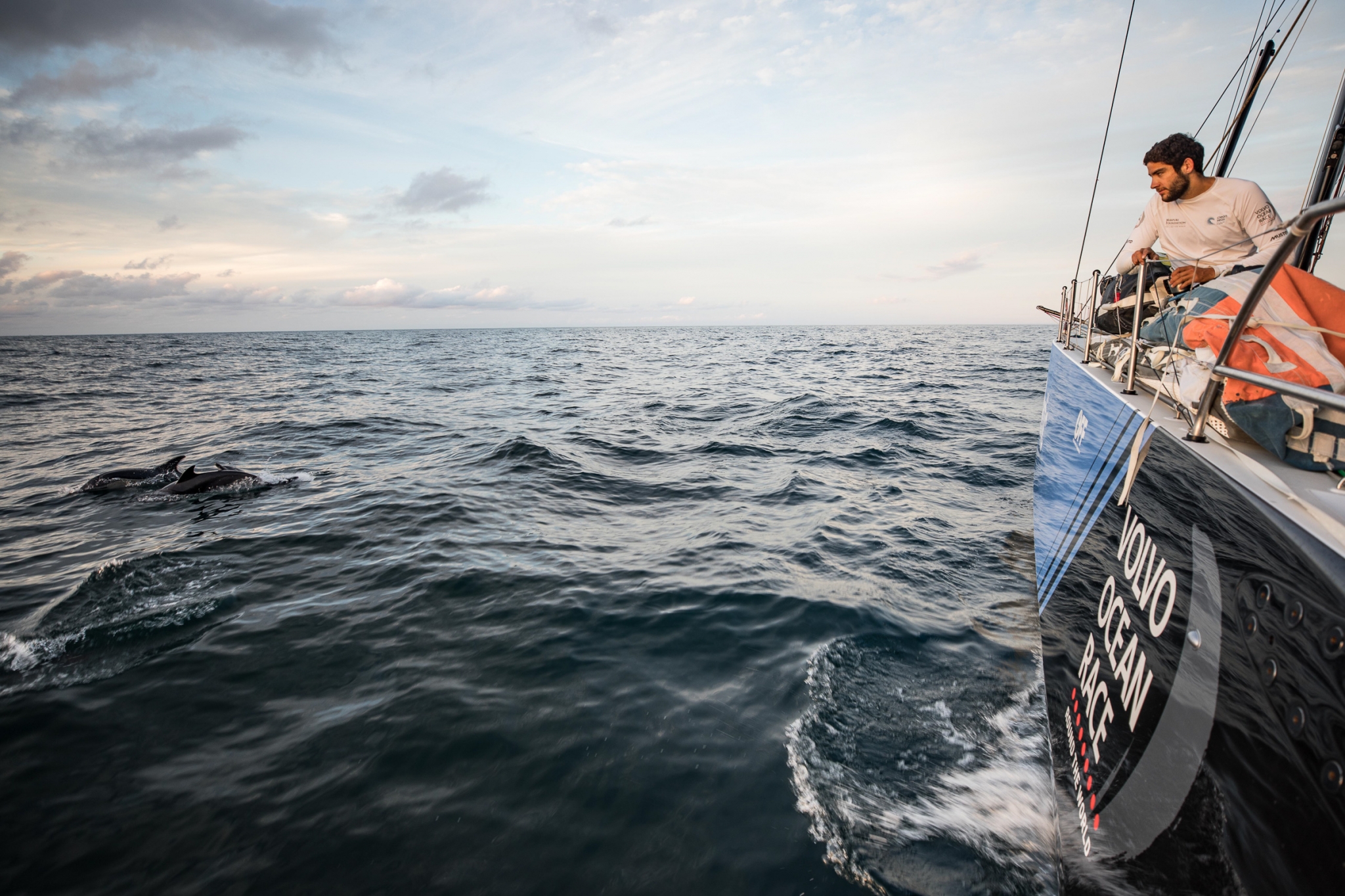 Leg Zero, St. Malo to Lisbon day 2: Brest to Lisbon on board Turn the Tide on Plastic. Photo by Jeremie Lecaudey. 15 August, 2017

Alicante has been an important host city for this race and this is the 4th time that this notoriously gruelling ocean race has started from Alicante. The Volvo Ocean race has been described as the longest and toughest professional sporting event in the world. In fact, the last race included 13 Olympians with a total of 19 World Championship titles between them. It attracts those who wish to push themselves to the limits of human adventure in a World-class competition, and Olympians and adventurers are in that category. 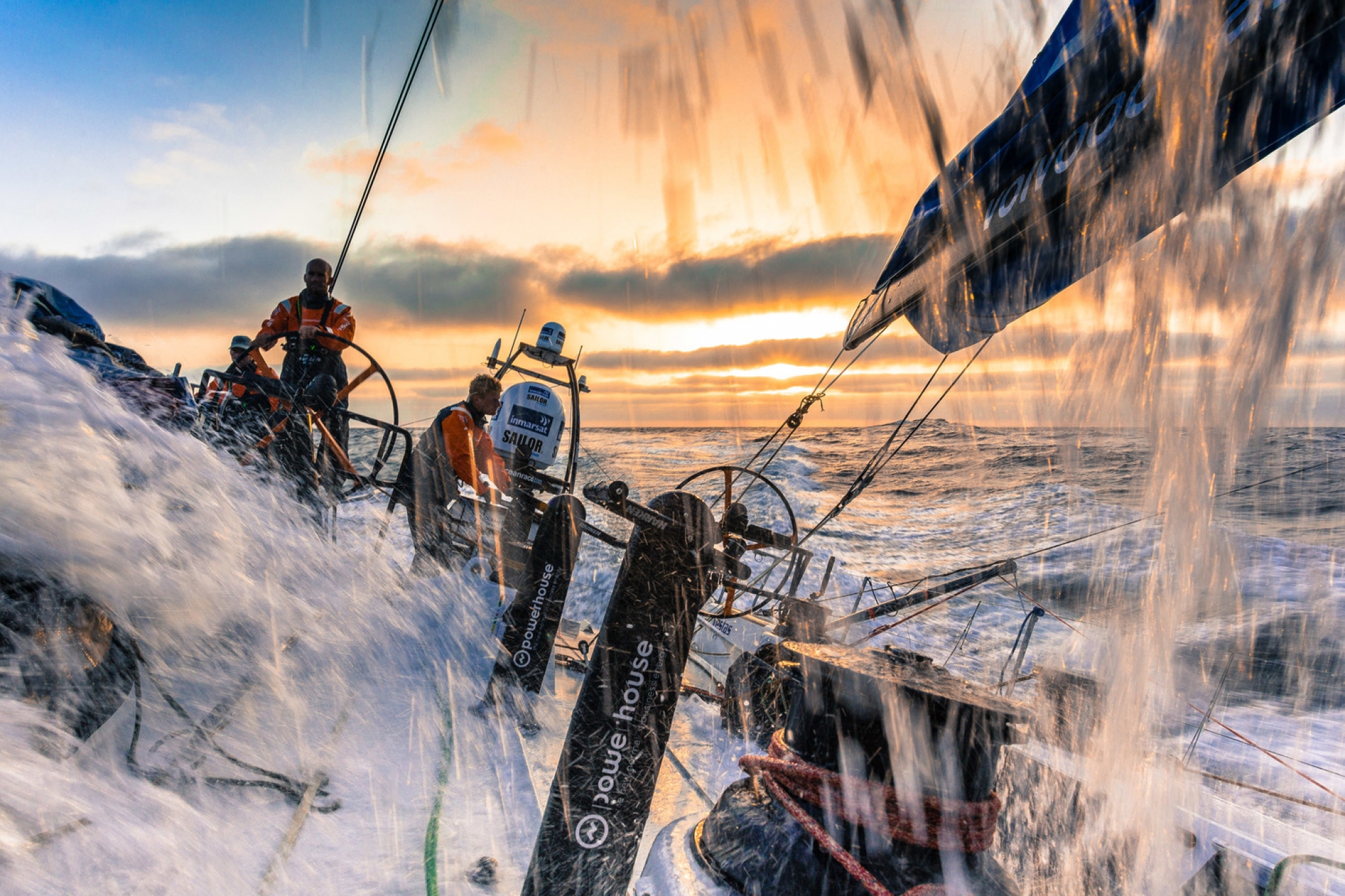 October 17, 2014. Leg 1 onboard Team Vestas Wind. Maciel Cicchetti driving, Tony Rae on mainsheet and Nicolai Sehestead on trim as the boat surfs at 25 knts on the morning of Day 8.

This year the Race Village in Alicante will be open from Wednesday 11th October and there are lots of experiences for visitors to the village to enjoy, the majority of which will be free. There will be an extensive programme of events and activities including an interactive museum, kid’s workshops, a wind tunnel, pedal cars, an introduction to sailing, family activities, performances and animations, concerts and of course the race itself, which will be departing on the 22nd October. 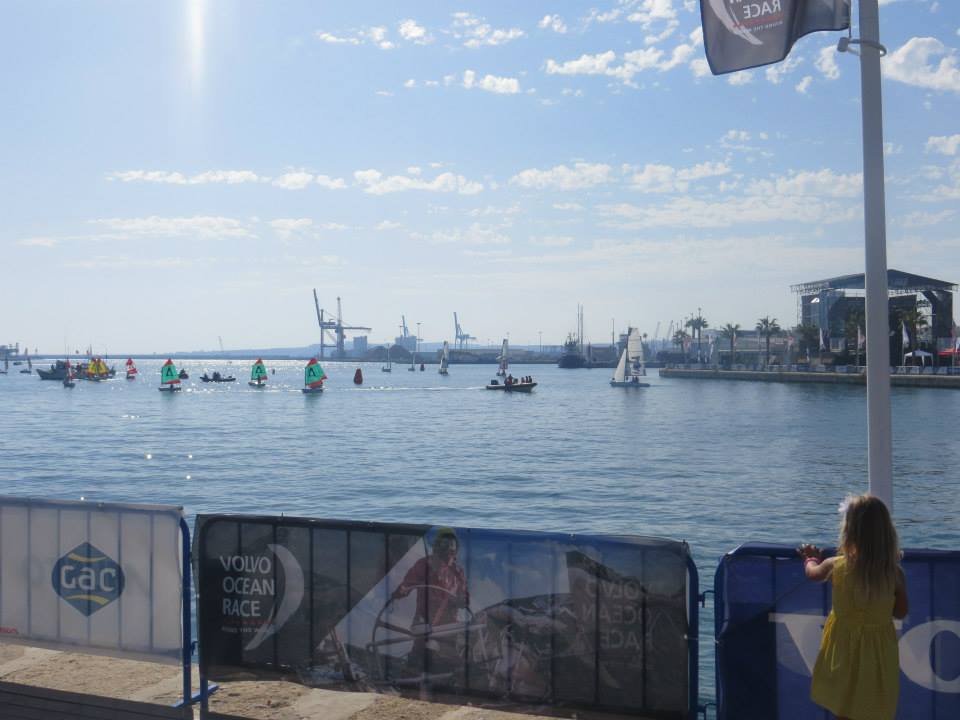 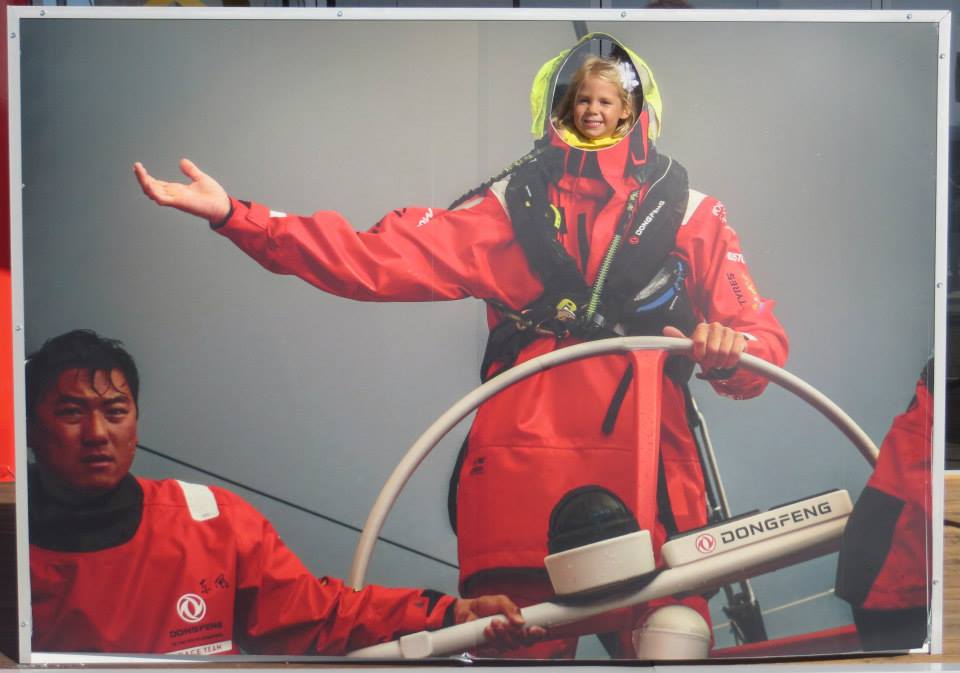 We hope you enjoy these pictures from the 2014/2015 Race and Ashlee in the Race Village before the race started. Full details of all the activities can be found at: http://alicantepuertodesalida.com/ and the race itself: http://www.volvooceanrace.com/en/home.html. So, get yourselves into Alicante to take part in these activities, see the Race Village and learn some more about this infamous event.

Oh, and don´t forget that on the 9th October in Alicante, there will be a parade along the explanada to celebrate Valencia Day (see our previous article from October last year online). 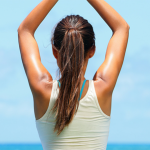 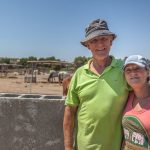